Anti-strikes bill to be introduced to Parliament 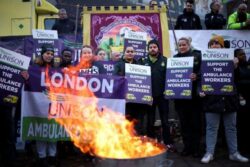 Anti-strikes bill to be introduced to Parliament

An anti-strike bill will be introduced to Parliament on Tuesday which would ensure public sector services maintain minimum service levels during strike action.

It means that some trade union members would be required to continue working during a strike. Downing Street says the measures are necessary to “protect the public.”

Unions have slammed the move and threatened legal action, while Labour says the plans “won’t work.”

The news of the bill comes amid mass strikes across the public sector as workers seek rises in the face of the rising cost of living.

Ambulance staff are preparing to walk out on Wednesday after talks with the government and health service unions failed.

Pay talks between government and unions

A series of short meetings between union officials and government ministers on Monday were designed to talk about what pay might look like in the next financial year starting in April, rather than current pay.

The government are considering a one-off payment, and also considering backdating any pay deal for the next financial year to the start of this calendar year, giving workers another three months at whatever rate they secure in the pay settlement benign worked on.

The bill regarding a minimum level of service during strike action was promised for public transport as part of the Conservatives 2019 manifesto. The bill was introduced to Parliament in October.

But the government wants to extend the requirement to five other areas  – the NHS, education, fire and rescue, border security and nuclear decommissioning.