Anthony Martial ruled out of Manchester United’s trip to Chelsea 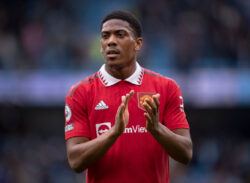 Anthony Martial’s season continues to be badly hit by injury, with the striker ruled out of Manchester United’s trip to Chelsea on Saturday evening.

The 26-year-old has managed just three Premier League appearances so far this campaign, with just one of them coming in a starting XI as a number of minor injuries continue to hamper him, the latest being a back problem.

When he has been on the field, the Frenchman has looked good, memorably coming off the bench to score twice in the wild 6-3 defeat to Manchester City.

However, he will not feature against Chelsea on Saturday, with manager Erik ten Hag confirming that Martial will not be part of the squad at Stamford Bridge.

This leaves Ten Hag slightly light on options up front, with Cristiano Ronaldo also not involved in the squad in west London after he refused to come off the bench against Tottenham in midweek, then walked down the tunnel before the game ended.

Ten Hag confirmed the situation in a press conference on Friday, saying it was Ronaldo’s second indiscretion after he left early during a friendly with Rayo Vallecano during the summer.

‘After Vallecano, I told him it was unacceptable but not him everyone, this is the second time, there are consequences. We miss him tomorrow. It’s a miss for the squad but it’s important for the attitude and mentality of the group and now we have to focus on Chelsea as that is important.’

Ten Hag fielded a front three of Marcus Rashford, flanked by Antony and Jadon Sancho against Spurs on Wednesday night and that is likely to be the case again when they go to London.

Casemiro and Fred started in central midfield behind Bruno Fernandes, with Christian Eriksen dropped to the bench. All are competing to start against Graham Potter’s side.

The Frenchman has been struggling for fitness all season.