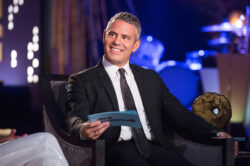 Andy Cohen has claimed that James Corden took inspiration from his Watch What Happens Live set.

The 54-year-old has been fronting his beloved talk show since 2009 and has interviewed a bevvy of stars including Kim Kardashian, Naomi Campbell and Victoria Beckham.

However, the TV personality revealed that he doesn’t feel like he gets the recognition he deserves in comparison to other talk show hosts.

He then pointed out how Late Late Show host James ‘got a bar’ for his popular programme.

He added: ‘James Corden kind of wound up….’ before Bozzi completed his sentence by saying: ‘Ripping off your show.’

‘I would argue that Watch What Happens Live redefined what the late night talk show is.’ (Picture: Getty)

James is stepping down as host next year (Picture: Getty)

This isn’t the first time James – who is stepping down from the Late Late Show next year – has been accused of appropriating material.

During a clip from his late night talk show, the presenter discussed Elon Musk’s Twitter takeover, but fans noticed the monologue was very similar to one of Ricky Gervais’ routines from his Humanity special, with the After Life creator referencing it in a now-deleted tweet.

In October, James said on his show: ‘That’s what I think when you see Elon Musk talk about Twitter, he says, “well it’s the town square”, but it isn’t.

Ricky Gervais claims James was ‘horrified’ and contacted him directly after ‘stealing’ his joke (Picture: WireImage)

‘Well that sign wasn’t for you, it was for somebody else, you don’t have to get mad about all of it.’

The Office creator shared a since-removed clip and wrote: ‘The bit about the town square advert for guitar lessons is brilliant’, referencing his own joke, which is almost identical to the one James had told.

James was met with fierce backlash and later claimed the joke was copied ‘inadvertently’ without realising where it originated, and Ricky later deleted his tweet because he ‘felt sorry’ for the Gavin & Stacey star, while he has now confirmed James contacted him directly over the situation.

He told the Headliners podcast: ‘He did. I said “Don’t worry about it”, I said “if your writers were in the back of the room when I was warming up and you got it out there before I did it on Netflix…”, but whatever you think of James Corden there is no way he knowingly ripped off my joke and thought he’d get away with it.’

Metro.co.uk has reached out to James Corden’s reps for comment.


MORE : Kim Kardashian finds herself at centre of another Photoshop storm as fans accuse her of editing family’s Christmas photo


MORE : East 17 star Terry Coldwell thinks band was ahead of its time: ‘It’s so relevant to what is going on in the world today’