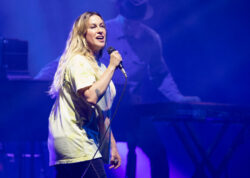 Alanis goes by Alanis Morissette all the time when her daughter’s around (Picture: Andrew Chin/Getty Images)

Alanis Morissette’s daughter, six-year-old Onyx, apparently calls her mum by her full name – instead of, you know, just saying ‘mom’.

The Canadian-American singer-songwriter, who had a string of massive hit singles in the mid-1990s, is a mother to three children.

As well as daughter Onyx, who was born in 2016, she has two sons, 11-year-old Ever Imre and three-year-old Winter Mercy.

Alanis, 48, whose 1995 album Jagged Little Pill was certified 10x platinum in the UK, married her husband Mario Treadway in 2010.

Speaking about her daughter, Alanis explained: ‘My daughter has taken to calling me by my full name because she notices that no one uses my full name when we’re in personal environments.’

Speaking to the Gary Bryan Morning Show in the US, she added: ‘So instead of saying “mom” she’ll say, “Alanis Morissette”‘.

Alanis didn’t reveal whether her sons have also picked up the habit, but she did admit that all of her children are fans of her music.

‘They do [listen to my albums], even when I’m like “Shut that off!” They’re so sweet,’ she told the Pennsylvania-based radio programme.

In a 2020 interview with Health Magazine, she gave details about ‘unschooling’, the controversial way that she’s been raising her three children.

Alanis and her husband Mario Treadway, who have three children together (Picture: Bruce Glikas/FilmMagic)

‘Unschooling, for me, is child-led education. If my daughter is like, “I want to put glitter on that thing and cut the tree and put the thing,” boom—we do that.’

She continued: ‘Unschooling is 24/7. When I share with people that I unschool, a lot of people I’m close with say they’d love to do it but just can’t. And I get it.’

‘My husband and I create pods all over the house — here’s where the spelling area is, and here’s where the fake animals are. There’s probably a better definition of unschooling, but there’s no rigidity to it.’

It was eventually turned into a musical in 2018.

You oughta know about this.