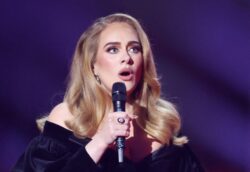 Adele is only human! (Picture: Reuters)

Adele may be a megastar, but that doesn’t make her immune to health woes, and she’s currently battling with ‘really bad sciatica.’

The Hello hitmaker is performing her Weekends With Adele residency at The Colosseum at Caesars Palace in Las Vegas, and even saw in 2023 with a set for very lucky fans on New Year’s Eve.

But despite putting on a killer show and never faltering with her stunning vocals, the 34-year-old is having to ‘waddle’ around the stage.

The Grammy winner was handing out t-shirts to members of the crowd when she complained about her chronic back pain, which made it difficult to run from one side of the venue to the other.

In quotes obtained by Daily Star, she said: ‘I’ve got two more I’ve just got to get over to the other side of the stage.

‘I have to waddle these days as I have really bad sciatica.’

The star is powering through the pain as she performs her Las Vegas residency (Picture: Kevin Mazur/Getty Images for AD)

Adele has spoken about her back pain before, previously sharing with The Face how it’s taken a toll on her life.

‘I’ve been in pain with my back for, like, half of my life, really,’ Adele said.

‘It flares up, normally due to stress or from a stupid bit of posture.’

She explained that she slipped her first disc when she was 15 from sneezing. A slipped disc is when a soft cushion of tissue between the bones in your spine pushes out.

The singer has been open about her chronic back pain in the past (Picutre: Kevin Mazur/Getty Images for AD)

‘I was in bed and I sneezed and my fifth one flew out,’ she recalled.

Then, in January last year, she slipped her sixth one.

‘And then where I had a C-section, my core was useless,’ she told magazine, as she shared her newfound love for exercise and the physical benefits it had for her health.

Powering through the pain, Adele is continuing to bring joy to fans in Vegas, with audience members travelling from far and wide to be able to belt out her hits with her in front of them.

The Grammy-winning artist is currently loved up with Paul Rich, and even serenaded him for his birthday (Picture: Getty Images)

One very special person who’s been in the audience, though, is the star’s boyfriend, who recently lived many people’s dreams as she serenaded him in her concert.

Adele, whose Vegas residency runs through until March, confirmed her relationship with the sports agent in September 2021, following her divorce from ex-husband Simon Konecki in 2019.

Taking to the mic in December, the singer celebrated her other half’s 41st in glamorous style.

‘It’s my boyfriend’s birthday today, and I love him more than life itself. Can we wish him happy birthday?’, she asked the packed theatre.

Her boyfriend was surely delighted as the crowd burst into song for him, which Adele herself also bursting into her infectious cackle.

Imagine being able to say that, not only are you dating Adele, but she got Las Vegas to sing for you on your birthday? Living the dream or what?


MORE : Sir Ian McKellen, 83, celebrates New Year with pantomime co-star, 29, who plays his son – and our hearts have truly melted

She’s powering through the pain.