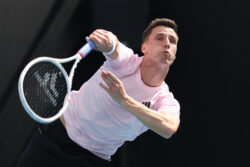 Neal Skupski reached the quarter-finals of the men’s doubles at the Australian Open but there was a rare early loss for Joe Salisbury.

Londoner Salisbury and his American partner Rajeev Ram won the title at Melbourne Park in 2020 and had reached at least the quarter-finals at all but one grand slam since.

Second seeds Salisbury and Ram have seen several slam chances slip by and this was another after they led 4-1 in the second-set tie-break and held a match point.

Skupski and Dutchman Wesley Koolhof are looking for their first grand-slam title but are the top seeds after a brilliant 2022 season.

They eased to a 6-4, 6-2 win over Serbia’s Nikola Cacic and Aisam-ul-Haq Qureshi, of Pakistan, and will take on Australian wild-cards Rinky Hijikata and Jason Kubler for a place in the semi-finals.

Skupski is also through to the quarter-finals of the mixed doubles with American Desirae Krawczyk.

The pair were due to take on Jamie Murray and Taylor Townsend today.

Skupski and partner Wesley Koolhof through to quarter-finals in Melbourne.