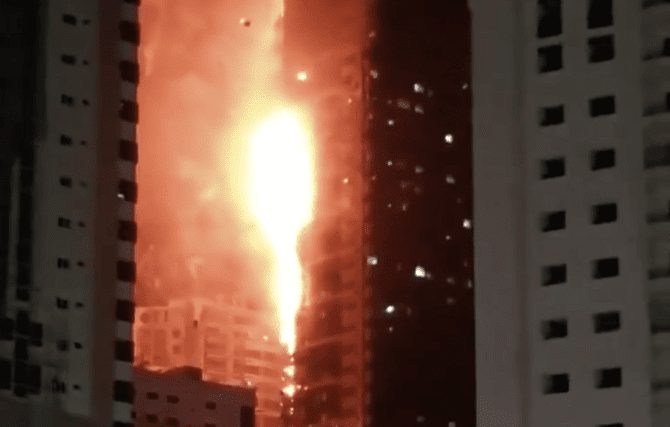 A massive fire raged through a 48-floor building in the Emirate of Sharjah, UAE. Twelve people were injured, 5 rushed to hospital with smoke inhalation and 7 treated on the spot.

Civil defence teams were alerted shortly after 9 p.m. and rushed to the site to brought the fire under control after two hours, averting a major disaster. Residents from at least five buildings nearby were led to safety.

Initial reports said the fire broke out on the tenth floor of the Abbco Tower at 9.04 pm, moving up quickly due to the cladding. The cause of the fire is yet to be ascertained.

Fire broke out in a 50 story building in Sharjah #sharjah pic.twitter.com/vjyh4ngXyJ

‘My thoughts were on trying to get my wife and children out of the apartment’: A tenant said, another added  “Right now, I am thankful that my family and I are safe. I will have to take into account my losses over the next couple of days when I get a broader picture of the situation.”

Residents from the Abbco Tower were provided within the housing by the Emirates Red Crescent.

Colonel Sami Khamis Al Naqbi, Director-General of Sharjah Civil Defence said that all residents were evacuated before the fire spread, which helped avoid serious injury and prevent the blaze from spreading to neighbouring buildings.

The police used a drone to check if there were any people trapped inside, said Colonel Dr Ali Abu Al Zoud, Deputy Director-General of Central Operations of Sharjah Police.

The current Sharjah’s fire isn’t the first to occur in the UAE this year; A fire broke out at Duja Tower, opposite World Trade Center in Dubai, on Thursday night February 2020 where More than 300 families were evacuated, though no casualties were reported.