Firefighters in Turkey continued their battle on Sunday night to control the raging wildfires in the resort towns of Manavgat and Marmaris. Tourists in nearby Bodrum have also been evacuated to the Aegean coast.

According to local authorities, most of the fires that erupted in Turkey in the last five days have been contained. However, they are struggling to contain the wildfires in Manavgat in the south and Marmaris in the west, which are being fuelled by the heat and winds, Forestry Minister Bekir Pakdemirli said.

Wildfires in southern Turkey have killed at least eight people and injured hundreds more. Authorities have told tourists to leave several popular beach resorts. Turkish authorities say they are investigating what started the fires and are not ruling out arson.

Forcing President Recep Tayyip Erdogan has declared the affected regions on the Aegean and Mediterranean coasts a disaster area.

In the popular resort town of Bodrum, tourists and the hotel staff were evacuated by boat as flames spread and plumes of smoke filled the sky. Other tourists had been evacuated in recent days. By Sunday morning, Pakdemirli said the blaze in the area was contained but in the evening firefighters were still working on controlling the blaze. The sudden change in wind direction makes it difficult to contain such wildfires.

Since Wednesday eight people have died because of the fires across southern and western Turkey and thousands of people have been evacuated from their homes. Locals, as well as support teams from Russia, Ukraine, Iran and Azerbaijan, were deployed to help firefighters.

According to the Turkish National Forest Ministry data so far 107 out of the 112 fires that broke out in the past five days in Turkey have been contained as of Sunday morning, but five are still raging powerfully.

Europe has been straddled with extremes, Two weeks ago flash flooding wreaked havoc in central Europe and destroyed entire communities in Belgium and Germany.

This week the climate has changed, this time to extreme heat, which has been fanned by strong winds, wildfires are destroying huge swathes of land from Finland to southern Turkey, and hot and dry conditions are increasing the danger of more fires erupting. Blazes are threatening beach resorts in Italy and wreaking havoc in Greece, which is in the grip of another heatwave.

In neighbouring Greece, firefighters were trying to contain a wildfire burning in the west of the country that destroyed houses and left 15 citizens in hospital with breathing problems on Saturday, authorities said.

A forest fire east of the country’s third-largest city of Patras forced the evacuation of four villages and the rescue of people stranded on a beach. All in all, authorities have had to tackle 56 wildfires in the past 24 hours amid a combination of dry weather, a heatwave and strong winds.

Meteorologists fear for the worst for Greece as they expect the country has not seen the worst of the wildfires. Temperatures have been excessively high in much of the country in recent days and are expected to reach 47 degrees on Monday and Tuesday.

On the Italian island of Sicily, firemen said that they were battling for a second straight day to contain the wildfire that reached the town of Catania, forcing people to leave their homes. 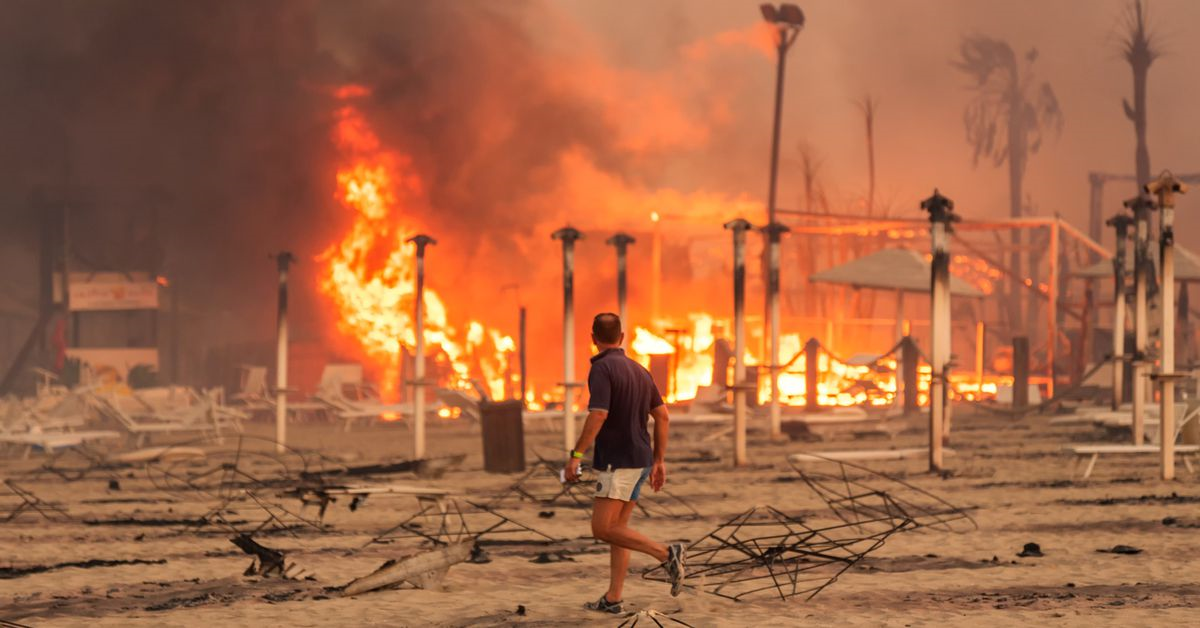 The smoke in the region has forced the local airport to temporarily shut down, making the rescue efforts that bit more challenging.

An elderly home in the Adriatic city of Pescara also had to be evacuated on Sunday as a wildfire threatened the area, local officials told state TV.

At least five people in the city have been taken to hospitals with injuries, local media reported.

In eastern Bosnia, a raging blaze threatened to engulf villages on Veliki Stolac mountain. The region is home to the Pancic spruce, one of the oldest tree species in Europe. The fire was eventually brought under control.