Monday is expected to see a drop in the glorious temperatures the UK has seen over the Easter weekend. Monday is expected to see a drop in the glorious temperatures the UK has seen over the Easter weekend.

In some areas of the UK, temps are to drop and may even see rain. Temperatures were expected to reach the high teens on Sunday with the possibility of even higher in the south after Good Friday was the warmest day of the year so far, with a record 23,4C recorded in St James’s Park in London. 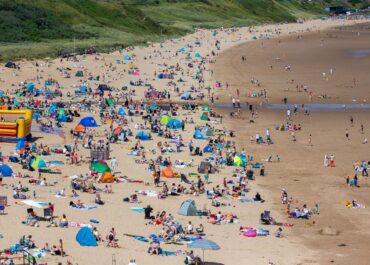 Cloudy skies were expected in the west on Sunday with outbreaks of rain across Northern Ireland and western Scotland edging slowly eastwards in a week that the UK Met Office said would bring a return to more normal April temperatures – the average around 12C.

It was predicted that temps would start to drop from Easter Monday with some scattered rain and clouds over the week.

“The idea is temperatures gradually just creeping down each day for the next few days across the UK,” Marco Petagna, a senior meteorologist at the Met Office said.

“The farther south and south-east you go the better chances to stay fine again, but [it will be] slightly cooler [on Monday] at 19 in the south-east, low to mid-teens elsewhere.”

Monday will also see pollen levels drop in many areas – a win for those who suffer from hay fever. Easter Monday may be the last of the dry, bright weather for the week which has seen moderate UV levels with the “sun as strong now as during August.”

He said: “Tuesday and Wednesday could see a few showers, particularly across the south of the UK. And then the second half of the week is when we get an easterly wind developing, more in the way of cloud pushing in from the east with some patchy rain but still a lot of relatively dry weather too.

“But the trend is certainly for temperatures to take a bit of a dip, so we’re sort of back down to low locally mid-single figures by Thursday.”

This Easter weekend – both warm and the first Easter without lockdown restrictions for two years – saw Brits flock to the coast with Bournemouth and Cornwall becoming hotspots for sunseekers.

People returning from weekend breaks have been advised to either travel before 10.30am or after 6.30 pm on Easter Monday to avoid queues.