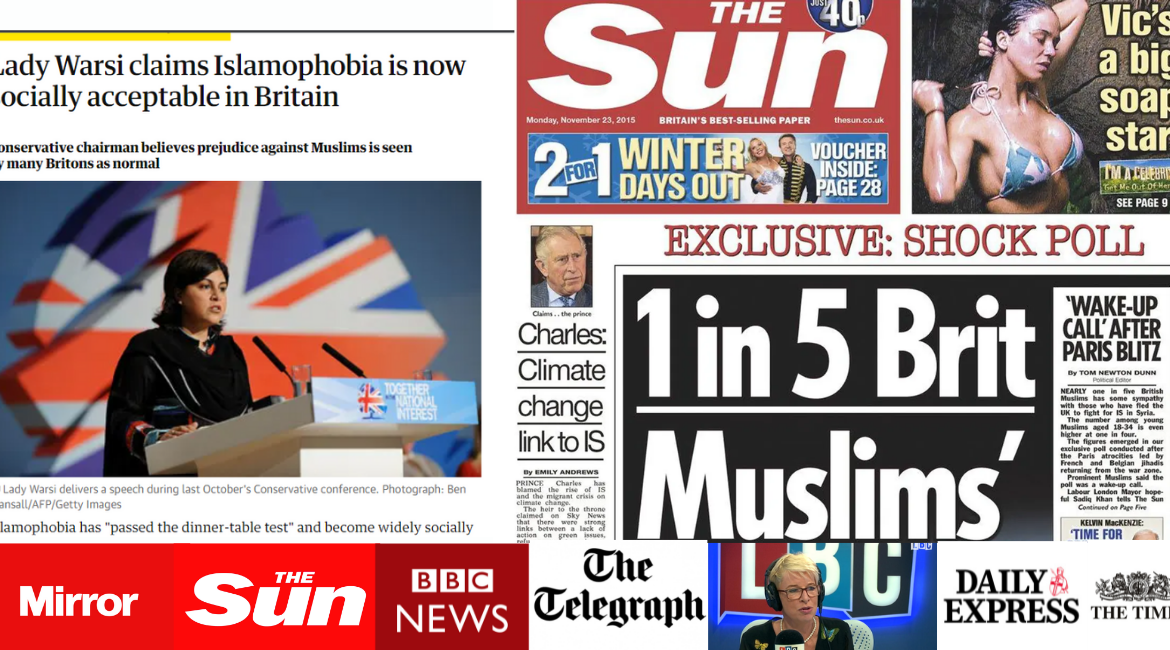 Widespread bias and islamophobia outlined in UK press. A report into British media’s coverage during 2018-2020 has revealed that almost 60% of online media articles and 47% of television clips associated with Muslims and Islam are associated with a negative aspect or behaviour.

Centre for Media Monitoring’s report analysed over 48,000 online articles and 5,500 broadcast clips to reach the conclusion that most of the coverage was negative about Muslims and Islam or both.

This is one of the most extensive pieces of statistical reports dedicated to highlighting how Muslims and Islam are reported in the British media and reveals hundreds of examples of the sheer scale of negative reporting associated with Muslims in the UK.

Responding to the findings, the editor of The Sunday Times, Emma Tucker said: “I welcome this report — in the full knowledge that it contains criticisms of the press, my own paper included.”

The study also looked at 10 case studies showing Muslims were misrepresented, defamed, and libelled in major publications, with damages paid in nine of the cases, alongside public apologies.

The Muslim Council of Britain’s Centre for Media Monitoring monitored 34 media outlets via their online websites and 38 television channels (including all regional channels) between Oct 2018 – Sept 2019.

The report was launched on Tuesday night with participation from Alison Phillips from The Mirror; Emma Tucker from The Sunday Times; Mark Easton from BBC; Nasrine Malik from The Guardian, Inzamam Rashid from Sky, and academics Brian Cathcart, Professor John Holmwood, and Waj Iqbal.

Some newspapers are making the change

The report points to some improvements in the treatment of Muslims by highlighting positive and fair coverage of Muslims in the media, including the BBC’s reporting of the persecution of Uighur Muslims, The Sun’s featuring of Asma Shuweikh as a “hero of the week” and the prominence of Muslim women supporting the NHS on the front page of The Daily Telegraph.

The report says that almost 60% of articles across all publications were identified as associating negative aspects and behaviour with Muslims or Islam; over one in five articles had a primary focus on terrorism/extremism; right-leaning and religious publications have a higher percentage of articles either demonstrating a bias against or generalising or misrepresenting Muslim belief or behaviour.

The report found that national broadcasters have a higher percentage of bias against Muslims and/or Islam as opposed to regional broadcasters; 47% of all clips showed Muslims and/or Islam in a manner that presented negative aspects and/or behaviour; right-wing pundits were on many occasions left unchallenged when making generalisations against Muslims including promoting falsehoods.

Alison Philips, editor in chief of The Mirror, said: “This report by the Centre for Media Monitoring shows how much we as journalists must question ourselves and the work we are producing in relation to reporting of Muslims and Islam.”

The top three news providers most likely to publish negative articles about Muslims were the agencies AFP, Reuters, and The Associated Press, the report claimed.  It argued they “set the framing of Muslims and Islam” in news reporting.

The report accused publications on the right politically of “increasingly regurgitating far-right tropes” and claimed commentators on the right “continuously rail against Muslims as an existential threat to Britain and the wider world”.

The Director of MCB’s Centre for Media Monitoring, Rizwana Hamid said: “This latest report does not seek to place blame on any newspaper or broadcaster, nor on any individual journalist or reporter.