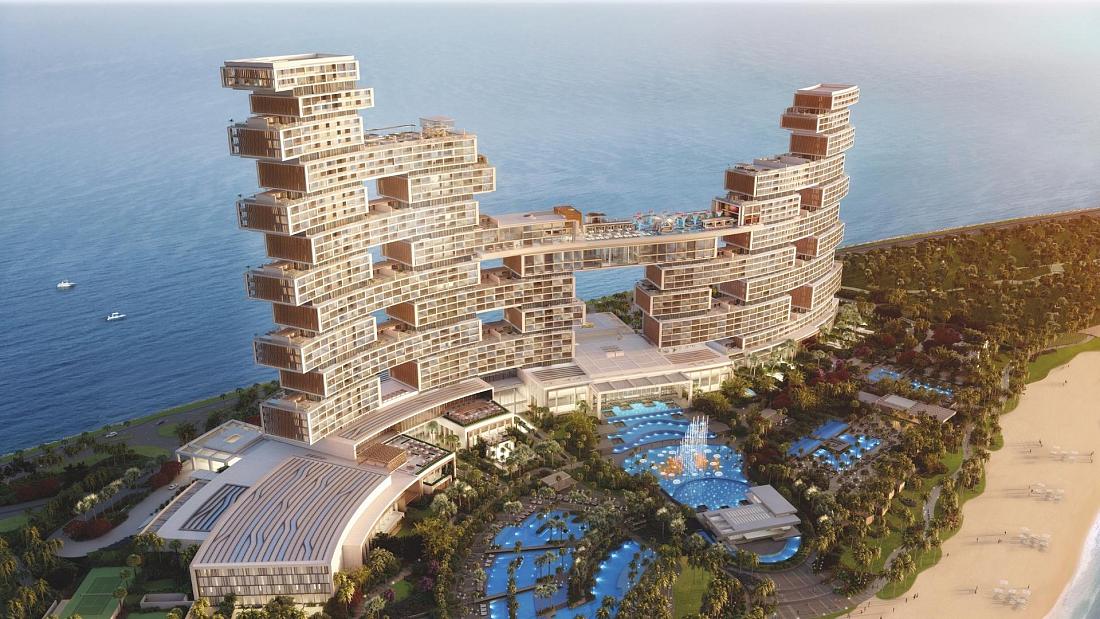 Atlantis The Royal is set to open at the end of 2022 and with the opening, it will bring 17 new bars and restaurants, a wealth of entertainment venues and even 4,000 jellyfish to the region.

“Atlantis The Royal is designed for a different type of customer,” says Managing Director and Executive Vice President of Atlantis Dubai, Tim Kelly, speaking at Arabian Travel Market, the leading international travel and tourism event in the Middle East

“It will have its own identity and personality with 44 villas in the clouds, each with their own infinity pool providing the next level of luxury and service in Dubai.”

Atlantis The Royal – ‘Villa in the clouds’

The Royal spans 17 hectares and houses 795 rooms, dozens of hospitality venues and a whopping 2 swimming pools – including a 90-metre-long sky pool that glistens almost 100 metres above Palm Jumeirah.

“It’s designed to be experienced from the inside looking out and that’s what’s very special,” says Kelly. “So regardless of where you are, whether it’s a room, a restaurant, a public space, or on the beach, you have this beautiful view of the Arabian Gulf or the Dubai skyline.”

Food at Atlantis The Royal

The new mega-resort comes with eight celebrity chef-backed restaurants, a list of unique culinary experiences and four bars and lounges.

Combined with the 33 offerings at Atlantis The Palm, both hotels will jointly create the most resort-operated food and beverage outlets in the region.

Heston Blumenthal will be offering up contemporary British fare at his ‘Dinner by Heston Blumenthal’ restaurants. He will be joined by José Andrés, local favourite Ariana Bundy and modern Peruvian chef Gastón Acurio.

Keep an eye out for Nobu by the Beach and Little Venice Cake Company by Mich Turner.

There will also be the all-day dining restaurant Gastronomy which will be able to seat 960 guests.

The new resort will feature five entertainment venues including Cloud 22, Elements, Ling Ling by Tao Group Hospitality, Nobu by the Beach and Resonance by Heston Blumenthal.

Heston Blumenthal’s Resonance is a cocktail bar that will offer up a nightly DJ and live music – it’ll also feature the world’s largest jellyfish tank.

By the shore, you’ll find the beachside spot Seascapes which will feature a live DJ and firepits, but Cloud 22 is what steals the show according to Kelly.

“It is such a special space with an infinity pool that’s 22 storeys high, overlooking the Dubai skyline. It has the ultimate in exclusivity and uniqueness,” he says.

“We’re also building up White Beach beach club and we’ll be flying in the top DJs in the world from Ibiza.”

What to do at Atlantis The Royal

All guests will get unlimited access to the world’s largest waterpark – Aquaventure. The 22.5-hectare site has 26 marine experiences and water sports and a massive 105 water slides including one that shoots you through a clear tube surrounded by sharks.

There are huge marine exhibits that span both resorts including The Lost Chambers Aquarium, the largest open-air aquarium in the region.

The oceanic park is home to 65,000 marine animals, as well as scuba diving, snorkelling and marine biology programmes.

There‘s a 5,045 square metre spa – AWAKEN if you just want to kick back and relax.

There’s nothing else like this on offer in the Dubai market currently,” says Kelly. “We have everything from a traditional hammam sensorium to meditation sessions with dolphins.

“Everything is 100 per cent vegan and aimed at total relaxation and rejuvenation.”

Italy holidays 2022 – Where to explore in beautiful Italy