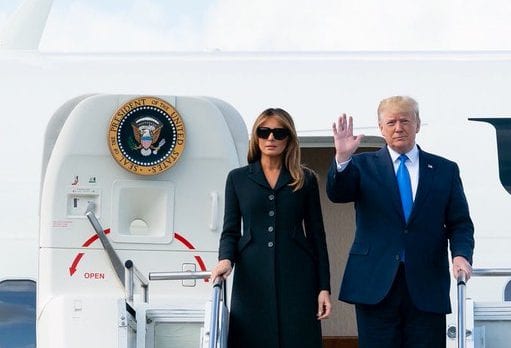 US President Donald Trump has arrived in London and he’s already making headlines.

Trump seems to be distancing himself from the  upcoming election as he insisted that he will not get involved in it but said Boris Johnson is “very competent.”

“It’s going to be a very important election for this country but I have no thoughts on it,” he told a press conference today.

However, he later said “Boris is very competent” and will do “a great job.”

The President said his refusal to wade in on the general election is because he didn’t want to complicate it.

“I don’t want to complicate it. I’ve won a lot of elections for a lot of people.

“I’ll stay out of the election,” he said.

Trump confirmed his UK visit will include a meeting with the prime minister.

And confirmed he is a “fan of Brexit” adding: “I called it the day before.”

Trump denied wanting involvement in the NHS, saying he didn’t know where the rumour came from.

When asked whether the NHS should be part of trade talks between the US and UK he said: “No not at all, I have nothing to do with it, never even thought about it, honestly.”

“We have enough, we are going to have a great healthcare system… in this country, they have to work it out for themselves.”

“If you handed it to us on a silver platter, we wouldn’t want nothing to do with it.”

Back in June, when asked about if the NHS would be up for grabs President Trump said everything would be on the table.

Read the Papers
PrevPrevious“Palestine is our first cause” – ‘it is the pulse of every Arab’ says the Saudi Prince
NextDaily News Briefing: North Korea’s warning to US – London Bridge attacker attended untested anti-terrorism schemes in prisonNext