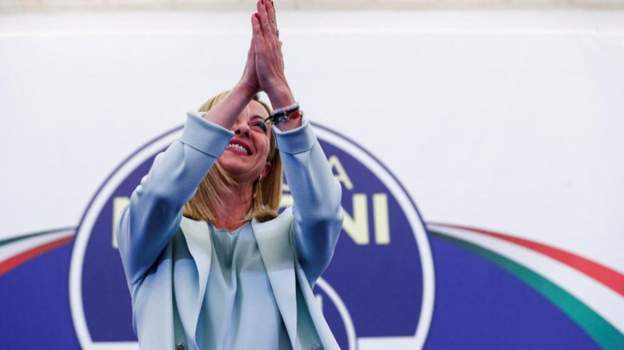 Italy’s Giorgia Meloni’s far-right Brothers of Italy wins the most votes in the Italian snap elections. In the lowest voter turnout since 1979.

The far-right party has come top in Italy’s snap general election, which, if confirmed, would likely see her become the country’s first female prime minister.

Italy will next push for the Italian version of Brexit as it reels from the harsh recession which is looming.

Italy will have its most right-wing government since WWII

If Italian news exit polls are accurate, Italy’s future government will consist of a coalition of the Meloni-led Brothers of Italy — a descendant of the Italian Social Movement, a neo-fascist party.

On Monday morning, the Brothers of Italy leader – who seems to have won the election and will likely become prime minister – tweeted: “We will not betray your trust. We are ready to lift up Italy again. THANK YOU!”

Santiago Abascal, the leader of the Spanish far-right party Vox, has congratulated Meloni on Twitter for what exit polls suggest is a landslide victory for her party and coalition.

“[Giorgia Meloni] has shown the road for a Europe that is proud, free and of sovereign natures, that are able to cooperate for the security and prosperity of all.

Feminists rally behind a leader who isn’t inclusive

In a highly patriarchal country whose leading political figures have overwhelmingly been male, Meloni’s victory represents a major break from the past.

As feminists rally behind the first female leader of Italy, they will ignore the lack of diversity and inclusivity in her campaigns.

Whilst Italy’s economic woes have not come from any Islamic violence, it did not stop the far-right leader from jumping on the bandwagon of Islamophobia during her campaign trail.

Meloni had spoken at a Vox rally in Marbella this summer, where she decried “LGBT lobbies” and “Islamic violence”.

Others to have joined the chorus of praise include Polish Prime Minister Mateusz Morawiecki, who tweeted “Congratulations [Giorgia Meloni]!”