Truss: we’ll rip up Brexit border deal - that's the headline for the Daily Express, which leads with the latest on the Northern Ireland protocol. 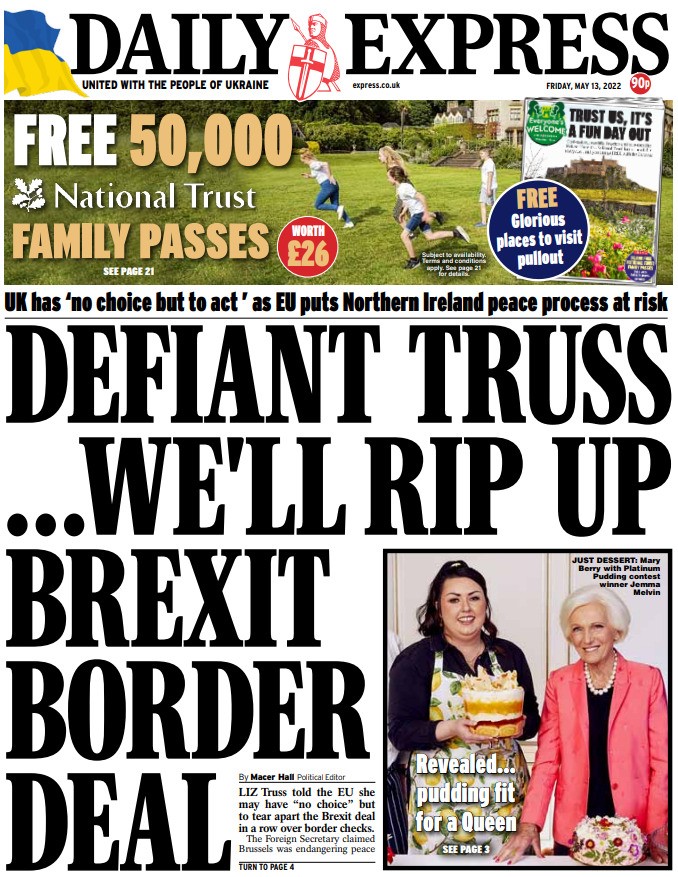 The Daily Express headline says that a “defiant” Foreign Secretary Liz Truss has warned: “We’ll rip up Brexit border deal”. The paper says Ms Truss told the EU she may have “no choice”, because the deal’s border checks between Britain and Northern Ireland were endangering peace.

It’s ready! Rishi’s rescue plan for millions is the headline on the front splash of the Daily Express that looks away from partygate.

Brussels warns : Turn lights off  , the Brexit deal could be “nixed” if the UK acts unilaterally, snubbing Liz Truss’ attempt to dismantle the Northern Ireland Protocol.

MEGHAN MARKLE’S father has been rushed to hospital after suffering what is thought to have been a stroke.

Scotland Yard’s verdict on photographs showing Boris Johnson at a leaving do during lockdown was that he was not partying, says the Daily Express.

Chancellor Rishi Sunak is being urged by the Express to come up with a “rescue plan” to help those struggling to cope with the rising cost of living.

Back into fold Imminent return of Meghan Markle to ‘fascinate’ UK

Back into fold , MEGHAN Markle’s body language with the Royal Family during Platinum Jubilee celebrations will be “fascinating”, a royal expert has said.