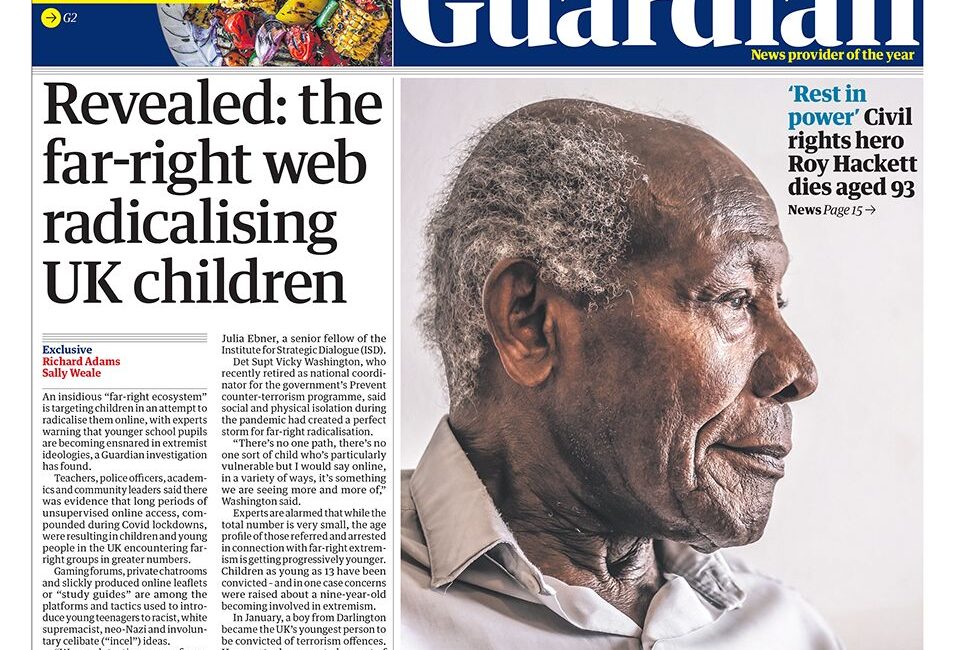 According to an investigation conducted by The Guardian, a “far-right ecosystem” is targetting children online to radicalise them.

More than 10,000 ambulance workers vote to strike in England and Wales

GMB union, announcing vote in favour of strikes across nine trusts, says action as much about patient safety as pay UK politics live – latest news updates More than 10,000 ambulance workers have voted to strike across nine trusts in England and Wales, the GMB union has announced. The GMB said workers across the ambulance services and some NHS trusts had voted to strike over the government’s 4% pay award, which it described as another

European Council’s ‘rapid reaction visit’ followed reports of diphtheria outbreak and squalid conditions Conditions for small boat arrivals at the Manston reception centre in Kent have sparked international concern and triggered a “rapid reaction” visit from European torture monitors in the last few days. A seven-strong delegation from the Council of Europe’s Prevention of Torture and Inhuman or Degrading Treatment or Punishment Committee carried out a the visit to Manston from 25-28 November due to

Minister writes to chiefs to establish Operation Safeguard due to lack of space in men’s prisons The Ministry of Justice has requested the emergency use of 400 police cells after running out of space in men’s prisons. Prisons minister Damian Hinds confirmed that he has written to the National Police Chiefs’ Council to establish the protocol known as Operation Safeguard, which was last used 16 years ago. Continue reading… ​Minister writes to chiefs to establish

England’s privatised water system is owned by funds, banks and billionaires across the world, as this country-by-country breakdown shows Revealed: more than 70% of English water industry is in foreign ownershipCan global water investors be held to account?England’s water: is privatised model a fair system?England’s water firms respond to investigation into role of global investors England is one of the few countries in the world where water is fully owned by private companies. These companies

Guardian analysis reveals more than 70% of English water industry in foreign ownership Revealed: more than 70% of English water industry is in foreign ownershipEngland’s water: the world’s piggy bankCan global water investors be held to account?England’s water: is privatised model a fair system? The water companies responded to the Guardian’s requests for comment as follows. A Severn Trent spokesperson said: “Since privatisation, Severn Trent has invested £25bn in infrastructure, including £100m each year improving

Eurostar security staff to strike in run-up to Christmas

Walkout by more than 100 staff will severely affect Eurostar services and travel plans, RMT says Security staff working for Eurostar have announced they will strike for four days in the run-up to Christmas, stoking fears of travel disruption and adding to a wave of industrial action across the economy in the festive period. Members of the RMT will strike on the 16, 18, 22 and 23 of December in a dispute over pay. The