A video has emerged of two unarmed Ukrainian civilians being shot dead by Russian soldiers as they had their backs turned, according to Metro. 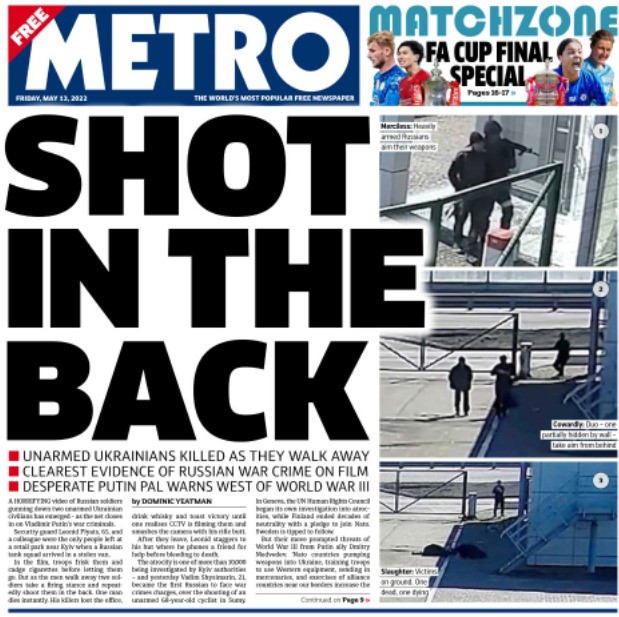 A video has emerged of two unarmed Ukrainian civilians being shot dead by Russian soldiers as they had their backs turned, according to Metro.

Metro’s front page features a series of stills taken from a video in which Russian soldiers aim their rifles from behind two Ukrainian civilians, who are then seen to fall to the ground – one dead, one dying, the paper explains. It says the video of the killing is the clearest evidence yet of Russian war crimes and adds that the atrocity is one of 10,000 being investigated by the authorities in Kyiv.

“A very lucky £184m dip” reads the headline of the Metro which reports on the historic UK lottery win.

The Metro says Crystal Palace manager Patrick Vieira kicked an Everton fan to the ground after being goaded during the pitch invasion at Goodison Park on Thursday evening.

The Metro says Sue Gray has demanded Partygate ‘ringleaders’ are named in her soon-to-be published report into No 10’s lockdown gatherings.

The Metro says Congratulations are in order for Ed Sheeran, who has welcomed a second child with wife Cherry Seaborn.

The Metro says Rihanna and A$AP Rocky are celebrating the birth of their first child together, it has been claimed.

The Metro says Boris Johnson was investigated over just two lockdown-breaking gatherings, it has been claimed.