BBC News says some High Street pharmacies in England will start vaccinating people from priority groups on Thursday, with 200 providing jabs in the next two weeks.

Six chemists in Halifax, Macclesfield, Widnes, Guildford, Edgware and Telford are the first to offer appointments to those invited by letter.

But pharmacists say many more sites should be allowed to give the jab, not just the largest ones. More than 2.6 million people in the UK have now received their first dose.

City workers urged to complain if forced into the office

CityAM says The City of London Corporation has called on workers to complain if they are being pressured into coming into work during England’s third national lockdown.

They have urged Square Mile workers to file an anonymous complaint if their employers are forcing them to break lockdown rules.

“No one should be travelling into work unless it is absolutely necessary, and those that do should think carefully about whether they truly need to be at their workplace,” said Keith Bottomley, chair of the City’s port health and environment committee.

“If your employer is pressuring you to go into work when you don’t need to, please do speak out.”

France24 says Italy’s former premier Matteo Renzi said he was pulling his party’s ministers from the cabinet, effectively leaving the ruling coalition without a majority in parliament.

His decision throws Italy into political chaos even as the country is struggling to contain the Covid-19 pandemic.

Renzi, who heads the tiny Italia Viva party, had long threatened to quit the government, complaining about Prime Minister Giuseppe Conte’s plans over how to spend billions of euros promised by the EU to relaunch the economy.

RT News says Scientists in Australia have called for a halt to the rollout of the AstraZeneca vaccine, claiming recent data has cast doubt on the inoculation’s ability to create herd immunity.

The scientists pointed to data from a study published in the Lancet last month that found the British-Swedish vaccine had only 62 per cent efficacy, compared with over 90 per cent for the Pfizer-BioNTech alternative.

A large-scale trial in the UK and Brazil reported a 62 per cent effectiveness for those who were vaccinated with two full doses of the AstraZeneca vaccine.

Australia has already purchased 53 million doses of the AstraZeneca vaccine, however.

Arab News says deaths from Covid-19 in Iran have exceeded 201,000, Paris-based opposition group the NCRI said on Wednesday. If their estimate is accurate, it means the country has the highest per-capita fatality rate in the world by far.

The figure is almost four times the Iranian government’s official tally. Senior doctors in the country have previously warned that the true total is likely to be much higher than official figures suggest.

Aljazeera says Hindu pilgrims have descended on the banks of the Ganges river in northern India, shrugging off Covid-19 risks for the start a religious festival that regularly attracts millions.

India’s severe outbreak – the second-most coronavirus infections in the world and more than 150,000 deaths – has not stopped devout Hindus from making the pilgrimage to Haridwar in Uttarakhand state.

“The pandemic is a bit of a worry, but we are taking all precautions,” said organiser Siddharth Chakrapani, who expected between 800,000 and a million people to attend on Thursday alone.

“I am sure Maa Ganga [Mother Ganges] will take care of their safety,” he added, referring to the river considered holy by the faithful.

Now that Trump is impeached again, what’s next?

TRT World says The US House of Representatives impeached Donald Trump for a second time, just days before he is scheduled to leave office, raising questions about what happens next.

The House voted 232-197 to impeach Trump, with 10 members of the Republican Party joining 222 Democrats.

Here are some of the possible scenarios after the House impeached Trump for inciting last week’s attack by his supporters on the US Capitol, as Congress tried to certify Democrat Joe Biden’s presidential election victory.

Rain, sleet, and snow will persist through much of the day across the UK today with overcast skies. It will, however, be drier in the south-west and for Northern Ireland with some sunny spells.

Rain, snow, and sleet will ease this evening, leaving a dry night. The cloud will also gradually thin throughout the night with weakening winds. The odd shower may linger in coastal areas.

Snowing for about 45minutes started laying in last half hour and already a decent covering ! #uksnow 5/10 pic.twitter.com/OaJTKeCnHd

What is QAnon? Inside the Trump cult

“Hollywood’s a place where they’ll pay you a thousand dollars for kiss, and fifty cents for your soul.”

Police have urged people to consider delaying any essential journeys after heavy snow across parts of Scotland.

The Met Office has issued an amber warning meaning there is a potential risk to life and an increased chance of travel disruption and power cuts. – BBC News

Recovering from Covid gives similar level of protection to vaccine

People who recover from coronavirus have a similar level of protection against future infection as those who receive a Covid vaccine – at least for the first five months, research suggests. – The Guardian

Lithuania commemorated on Wednesday the 30th anniversary of a deadly Soviet crackdown against the small Baltic state’s independence.

More than a dozen people lost their lives on January 13, 1991 when Soviet troops and tanks drove through crowds gathered in front of the television tower in Vilnius — seen as a symbol of independence. – Euronews

Russian authorities have launched a criminal investigation after eight people, including a child, were killed in a fire at an apartment block in the Urals.

Fire services were called to reports of a blaze in a nine-story residential building in the city of Yekaterinburg early on Tuesday. – Euronews

One week after the deadly insurrection at the Capitol, there are still more questions than answers on whether any lawmakers or police assisted the pro-Trump rioters.

The idea of an insurrection is unheard of in modern US history, and the possibility that lawmakers or allies inside the Capitol were helping only contributes to the uncertainty and worry about the event and what’s to come. – CNN

Klete Keller, a gold-medalist Olympic swimmer who competed alongside superstars Michael Phelps and Ryan Lochte, has been charged in connection with the riot at the Capitol last week, apparently captured on video wearing his Team USA jacket in the rotunda. – Fox News

Turkey says turning back on S-400s ‘problematic’, seeks US dialogue

Turkish Defense Minister Hulusi Akar said it would be “very problematic” for Ankara to turn back on its purchase of Russian S-400 defence systems but expressed hope that a dispute with the United States on the issue could be resolved through dialogue. – Arab News

Starting Thursday morning, the Lebanese people will be put to the test again, as a new 11-day lockdown is imposed.
All projections predict a spike in the country’s coronavirus disease (COVID-19) cases in the upcoming days, while the hundreds of intensive care hospital beds dedicated to COVID-19 patients are full. Doctors have started to check on patients inside ambulances, and ask those who need oxygen to provide it at their own expense, and stay home. – Arab News

China reported a death from COVID-19 on Thursday (Jan 14) – its first in eight months – as the country battles to contain a resurgence in cases and prepares for the arrival of an expert team from the World Health Organization (WHO). – CNA

Singapore Airlines raises US$500 million in US dollar debt debut

Singapore Airlines (SIA) has raised US$500 million (S$660 million) in its first US dollar bond issue, which the company will use to buy new aircraft as the global aviation industry prepares for a post-pandemic travel rebound. – CNA

EU must ‘move at speed’ on space broadband network

The European Commission says it wants its newly proposed satellite mega-constellation to be offering some sort of initial service in 2024.

The first priority is to fill in gaps in broadband coverage where ground infrastructure cannot reach, but later it will power services such as self-driving cars. – BBC News

With holidays cancelled and the chill of winter making our daily park walks ever less appealing, the idea of a sunny getaway is on the minds of many as the UK faces up to weeks of lockdown across all four nations. – Sky News 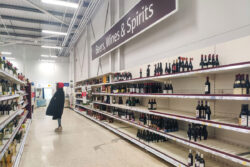 Manchester City 1-0 Brighton: Pep Guardiola’s side back in the Premier League title race – Read on

Hope Solo: Former US goalkeeper on why ‘sacrifice has to be made’ in fight for equal pay – Read on

Gwyneth Paltrow says she is uncomfortable with her fame – Read on