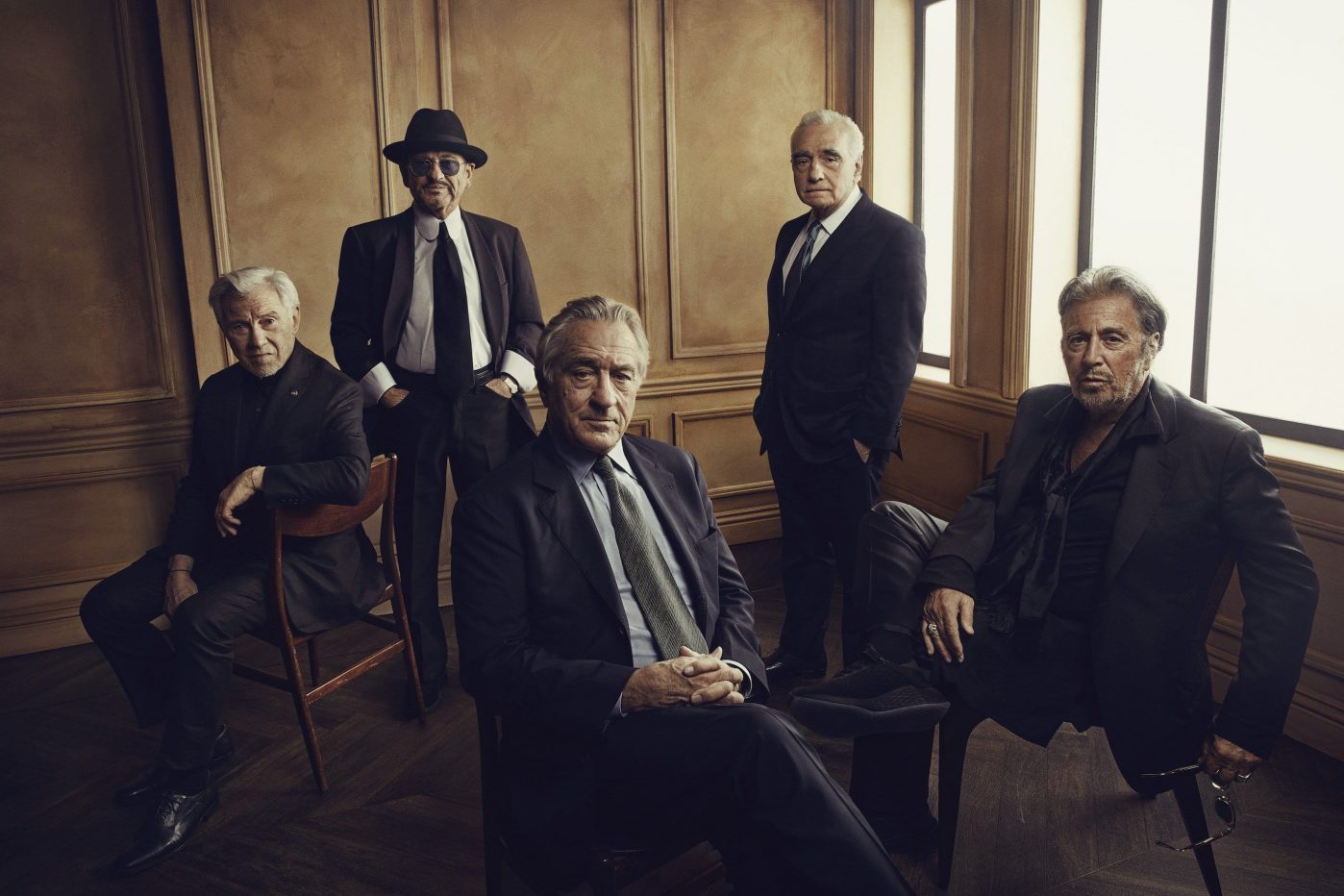 The years have rolled back for De Niro, Pacino and Pesci as they star in Martin Scorsese’s epic tale of the man who shot Jimmy Hoffa. And for Scorsese and the cast, the film is the ultimate love letter and goodbye to the fading mob glamour.

It’s likely to be the last organised crime film Martin Scorsese makes with this cast. A coming together of the Goodfellas and screen icon Al Pacino. At the heart of this modern classic is a sense of nostalgia and letting go.

And if this is Scorsese’s goodbye, he had a little intertextual fun with it. Robert De Niro stars as real-life Mob and Teamster labour union hitman, Frank Sheeran. In the film, he sets fire to a fleet of yellow cabs – just like the one he drove in Taxi Driver. They revisit a Raging Bull location and the site of Goodfellas most famous shot.

The Irishman morphs from a breezy comedy-drama about Sheeran’s involvement with the mob to a mournful reflection on friendship, betrayal and guilt.

A mid-thirties De Niro is bought into the mob life by Russell Bufalino (Pesci) who recommends him to Hoffa (Pacino). Hoffa trusts Sheeran to the point he leaves his bedroom door ajar when the pair share a hotel suite. A gesture to Hoffa that he is trusted and Hoffa has faith in his protectiveness.

28-years after Sheeran murders Hoffa, Sheeran leaves the door of his care home room open on his last night alive. It’s not entirely clear if its Sheeran inviting death into his room, an old habit or a man trusting in God.

Despite Sheeran clearly being troubled by the murder of Hoffa (as witnessed when he called Hoffa’s wife) he does not admit to the murder. He shows no remorse when visited by the priest or the FBI.

The film’s battle on the surface is between Hoffa and the mobsters who plan to kill him. But the real battle is between Sheeran and his conscience.

When Sheeran is tasked with the job of killing long-time friend Hoffa, he endures a long journey to the place the murder will take place. The house is located in a colourless, middle-class suburb that cleverly draws out feelings of blandness.  And once there, he matter-of-factly shoots Hoffa twice in the back of the head – a moment that elicits some of the most brilliantly opaque acting in De Niro’s career.

‘masterpiece with ice in its veins’

The Irishman, on the surface, is not like the mob films we know. You’ll find no Brooklyn wiseguys or men in black shirts. In the film, we see middle-aged family men who stay in motels and go bowling with their wives. The journey Sheeran goes on is richly contextualised by the era’s political shakeups.

As Sheeran reminisces about the events he intertwines mob patter with drops of Tarintino-style dialogue. The overarching irony of The Irishman is that it is based on a self-shaming fantasy of Sheeran’s that he told in interviews. Frank Sheeran claimed he killed Hoffa shortly before his death in 2003 and author Charles Brandt detailed his ‘confessions’ in the book I Heard You Paint Houses (2004). But there is no actual evidence Sheeran killed Hoffa or any of the others he claimed.

The film’s score is sombre and the cinematography sweeping. De Niro gives a performance that expertly shows off his range. He is dialled down, at the centre of the action but always removed from it. It is without a doubt his best work in years. Pesci steps back into the wise-guy role, his subtle performance is a thing of beauty. And Pacino’s bellicose but charming performance balances it out. The three are entangled in a dance, not stepping on each other toes, giving the audience a rare treat of simmering tension and chemistry.

The Irishman is an enthralling, haunting masterpiece with ice in its veins. Take a moment to savour the fine performances. And acknowledge you may never see such talent in a single frame again.