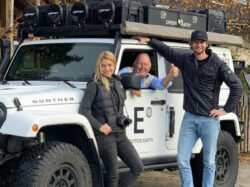 A New Zealand Instagram couple – who were documenting their travels around the world – have said they are “extremely relieved” to have returned home.

Topher Richwhite and Bridget Thackwray had arrived in Iran in July, but after failing to update their social media page, Expedition Earth, fears were raised.

The couple had reportedly been stopped at the Iranian border, where their vehicle was inspected. Mr Richwhite is the son of one of New Zealand’s richest men.

The couple’s Instagram page fell silent soon after the meeting with border officials.

New Zealand media reported the newlyweds were not imprisoned but unable to leave Iran and that their movements were restricted and monitored by regime officials.

Tehran insisted the pair had not been imprisoned or detailed and the Wellington government were reluctant to comment whilst discussions were ongoing – in fear of jeopardising their release.

The couple were released on Tuesday following months of negotiations.

Westerners have frequently been detained in Iran, in order to use them as bargaining chips to secure concessions from governments which have sanctioned it.

Most western countries – including NZ – advise against travelling to Iran.