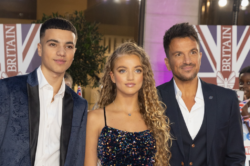 Peter Andre worries ‘every day’ about his son Junior Andre’s foray into the music industry and daughter Princess’s life in the spotlight.

The Mysterious Girl singer’s 17-year-old son is following in his dad’s footsteps into the world of music, having performed his first-ever gig this summer and also released his first single, Slide.

Speaking exclusively to Metro.co.uk at Monday night’s Pride Of Britain Awards at London’s Grosvenor House Hotel, Peter admitted that he used to worry when Junior first started out.

‘But he’s so level-headed,’ he added, with his two eldest children, Junior and Princess by his side. ‘When you speak to him, you’ll see what I mean.’

Peter Andre was joined by his daughter Princess and son Junior at the Pride of Britain Awards on Monday night (Picture: Wire Image)

Quickly U-turning, he corrected himself to add: ‘I mean, that’s not true. I’m a dad, of course, I worry every minute of the day.’

Peter, Junior, and Princess were clearly in sync with each other on the red carpet, with father and son wearing dark blue suits and Princess shining bright in a bejewelled navy dress.

Junior dropped his debut single in June this year, and it shot straight to the top of the iTunes chart.

Peter admitted that he worries about his kids’ lives in the spotlight (Picture: Wire Image)

The teen, who Peter shares with ex-wife Katie Price, signed a record deal with Columbia Records last August, which he said was a ‘dream come true.’

Dad Peter previously shared his own joy at seeing Junior launch his music career, writing: ‘Well done tonight son…You have no idea how proud I am of you tonight son, born to do it.’

He himself, of course, is well known for hits including Mysterious Girl, which was released in 1995 and reached number two in the UK.