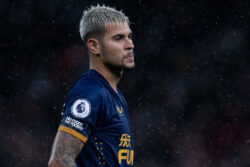 Bruno Guimaraes has massively impressed at Newcastle since joining from Lyon (Picture: Getty)

The 24-year-old Brazil international midfielder joined Newcastle in January from Lyon for £40m after snubbing Arsenal and has massively impressed – with Graham Potter now attempting to lure him to Stamford Bridge.

Guimaraes has registered seven goals and three assists across his opening 26 Premier League games, with Eddie Howe’s side currently fourth in the table.

Chelsea, who are below them in fifth, now want to take him to west London when the transfer window reopens in January.

Guimaraes is currently under contract until 2026 and it is thought Newcastle are considering offering him a new deal to fend off interest from Chelsea.

Murphy has urged the Saudi-backed club to do just that, telling talkSPORT: ‘Bruno Guimaraes, what a player. Honestly. Nail him down [to a new contract].

‘He’s got everything. He’s really, really tenacious, he’s clever on the ball in brave areas, he can see a pass and he can score.

‘The only thing with him when you look at how you’re going to set up is whether you play him in the deeper role to get you playing, or do you let him have more licence because he can score a goal.

‘It’s a great dilemma to have, but he has been their number one signing.

‘There have been other good performances and good signings, but he has been their main man.’

Newcastle won 2-1 at Tottenham on Sunday and some have tipped Howe’s side to challenge for a top-four finish this term after an impressive start.

Following that match, Alan Shearer said that ‘Guimaraes has been so good, he could get into any team in the Premier League on his current form’.

Guimaraes recently said that he felt as if he was ‘born to play in the Premier League’.

‘He has been their main man!’