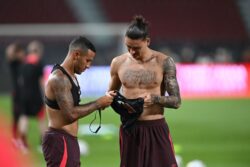 The Merseysiders have been forced to make a number of changes (Picture: Getty)

Liverpool boss Jurgen Klopp is without both Darwin Nunez and Thiago Alcantara for Saturday’s clash against Nottingham Forest but the pair are likely to be back to face Ajax.

The Uruguayan striker, an £85million signing from Benfica in the summer, netted the winning goal against West Ham on Wednesday but was withdrawn shortly before the hour mark.

Klopp confirmed afterwards that Nunez had ‘felt something’ and would need to be assessed by the club’s medical team, with Saturday’s lunchtime trip to the City Ground coming too soon.

In addition to being without the forward, midfielder Thiago has also come down with an ear inflection and was only ruled out in the early hours of the morning.

Speaking to BT Sport before kick-off, Klopp said of his missing stars: ‘No [it’s not precautionary], I wish I could do that. For Darwin the game comes too early.

‘He feels the intensity of the game [against West Ham] muscle-wise so there was no chance he could make today. Maybe tomorrow or Monday but not today.

Klopp has a number of injury issues to deal with at the moment (Picture: Getty)

‘And Thiago got a bad ear infection overnight. The decision was made this morning at 5.15am so that’s how it is sometimes and that’s the reason for that.’

In the absence of Nunez and Thiago, Klopp has made five changes from the team that beat West Ham with James Milner and Andy Robertson coming into the defence and Harvey Elliott, Fabinho and Curtis Jones all returning in midfield.

On his rotated line-up, Klopp continued: ‘If everyone can play regularly it makes a massive difference to be honest then you can make changes at the right moment.

‘For us it’s a problem that we have players coming back from injuries in a week like this. Three games in six days it’s just super intense.

‘That’s where you have to consider all different things and that’s what we do. A problem is only a problem until you find a solution and we found a solution. I’m really happy with it and now let’s go from here this will be an intense game.

‘I think it’s four or five changes from the last game. Fresh legs are in and that’s what we have to use, we have to be super intense in a fantastic atmosphere that I have experienced only once, but it was super good. So I’m really looking forward to it.’


MORE : ‘He will be back’ – Liverpool manager Jurgen Klopp sends message to Steven Gerrard after Aston Villa sacking

The Merseysiders have been forced to make a number of changes.