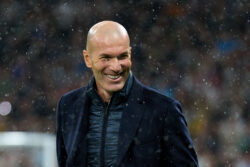 Zidane has revealed his return to the dugout could be imminent (Picture: Getty)

Zinedine Zidane is only interested in taking the France national team job, according to his former teammate Thierry Henry.

Zidane has been out of management since leaving Real Madrid for a second time in the summer of 2021. Despite his recent inactivity, he remains one of the most decorated coaches of the last decade and has been sought after for managerial roles across Europe.

Manchester United approached the legendary midfielder after sacking Ole Gunnar Solskjaer in 2021 only to be turned away.

He was heavily linked with the Paris Saint-Germain job following Mauricio Pochettino’s exit at the end of last season only for his representatives to firmly deny reports he was set to take the job.

Juventus, where Zidane spent five years of his career, are the latest club to be linked with his services with Massimiliano Allegri under immense pressure after the Bianconeri’s Champions League exit.

The prospect of Zidane heading to Turin was discussed on CBS Sports on Tuesday night, only for Henry to dismiss such suggestions and insist there is only one destination for Zidane.

Henry convinced Zidane only has eyes for one job (Picture: Getty)

‘I don’t think he will go there [Juventus]. I think he is waiting for one thing and one thing only and that’s the national team.’

He added: ‘You won three Champions Leagues with Real Madrid, why are you going to bother with other clubs? You can have the national team. I wouldn’t.’

Asked by Jamie Carragher if current France boss Didier Deschamps is definitely leaving his post after this winter’s World Cup, Henry said: ‘I don’t actually know but Zizou has been waiting.

‘He’s been linked with a lot of clubs and it never happened. I don’t think Zizou would want to do it, I can see him waiting for the national team and it makes total sense.’

Zidane himself hinted this week an announcement on his future could be imminent.

Speaking to RMC Sport, Zidane said: ‘Do I miss the coach’s suit? No, I’m not far away, we wait, we wait a little bit. Soon, soon. I’m not far from coaching again.’


MORE : ‘He is our guard dog!’ – Antony hails impact of Casemiro after transforming Manchester United’s midfield

The Frrenchman’s new role could be announced very soon.