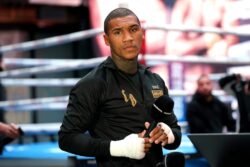 Conor Benn has ‘voluntarily relinquished’ his boxing licence with the British Boxing Board of Control following his failed drugs test.

A statement released on Wednesday by the British Boxing Board of Control read: ‘By a notice dated 17th October 2022, Mr. Conor Benn was called by the Board of the BBBofC to attend a hearing to deal with allegations of misconduct persuant to Rule 25.1.1.

‘The hearing took place on 21st October 2022. On the morning of the hearing, Mr. Benn voluntarily relinquished his licence with the BBBofC.

‘In accordance with its Rules and Regulations, the Board determined the allegations following the hearing at which Mr. Benn was legally represented.

‘The allegations of misconduct against Mr. Benn were upheld.’