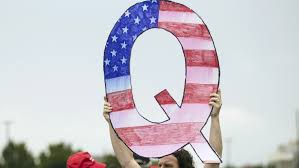 What is QAnon? Inside Trump’s cult

Since it’s come to light that QAnon supporters were amongst the crowd that stormed the US Capitol building last Wednesday, including several prominent activists we’re looking into the movement.

During the storming of the Capitol, supporters of the QAnon movement flew Q-themed banners inside and out. It’s no surprise, considering President Trump has described its activists as “people who love our country.”

Take a deeper look into four different headlines about QAnon and their role in society.

The Men Behind the Conspiracy

Leading researchers and critics who study and debunk QAnon disinformation say a key to identifying “Q” has been hiding in plain sight for years — on a pig farm south of Manila in the Philippines — at least until recently.

It remains unknown whether the “Q drops” are authored by one or several people or whether they live within or outside the U.S., burnishing the mystique at the heart of the phenomenon.

The two Americans most clearly associated with the author of thousands of “Q drops” dating back to October 2017 are James Arthur Watkins, 56, who gained control in 2015 of the controversial anonymous message board 8chan, and his son, Ronald Watkins, former 8chan administrator and current administrator of its successor, the Watkins-owned 8kun.

Since 2001, Watkins has been living in the Philippines, according to Philippines immigration records obtained by ABC News.

“If he’s not ‘Q’ himself, he can find out who ‘Q’ is at any time,” said Fredrick Brennan, the creator of 8chan and Watkins’ former business partner.

As Trump meets with QAnon influencers, the conspiracy’s adherents beg for dictatorship

NBC News says with Trump’s days in office dwindling, QAnon influencers have become increasingly restless and militant, urging him to #crosstherubicon, a reference to Julius Caesar’s crossing the Rubicon river after the Roman Senate explicitly told him not to, effectively kick-starting the Roman civil war and Caesar’s dictatorship.

The enthusiasm for military rule from the QAnon community has not dampened and sees hope in the fact that some of their central influencers are close to Trump.

QAnon followers believe the Democratic Party is run by satanic, child-eating cannibals and that Trump is secretly waging a war against them. Adherents follow “Q,” an anonymous poster to the extremist site 8kun, who has posted prophecies since 2017 that have repeatedly failed to materialize. The Q account, which usually posts several times a week, has largely been dormant since Election Day.

Some QAnon followers believe Trump is left with no choice but to declare martial law, a belief based in part on a series of wildly false news articles that have claimed that Trump is in a secret, ongoing land war with China in parts of the U.S.

Mike Rothschild, the author of a coming book about QAnon’s origins and real-world harms said: “These people have worked themselves into such a frenzied state thinking Trump won in a landslide and that the truth will be revealed any moment,” he said, predicting that when President-elect Joe Biden is sworn in and “none of the miracles they’ve been told are about to happen actually take place, it will be a life-shattering event.”

The Church of QAnon

The Church of QAnon: Will conspiracy theories form the basis of a new religious movement?

The Conversation says followers of the QAnon movement believe in wild and dangerous conspiracy theories about Donald Trump. Now a faction within the movement has been interpreting the Bible through QAnon conspiracies.

I have been studying the growth of the QAnon movement as part of my research into how extremist religious and political organizations create propaganda and recruit new members to ideological causes.

On Feb. 23, I logged onto Zoom to observe the first public service of what is essentially a QAnon church operating out of the Omega Kingdom Ministry (OKM). I’ve spent 12 weeks attending this two-hour Sunday morning service.

MarketWatch says to the QAnon community, and others involved in storming the Capitol: The Deep State is real, but it’s not what you think. The Deep State you worry about is mostly made up; a fiction, a lie, a product of active imaginations, grifter manipulations and the internet.

I’m telling you this now because storming the Capitol building has drawn the attention of the real Deep State — the national security bureaucracy — and it’s important you understand what that means.

You attacked America. Maybe you think it was justified — as a response to a stolen election, or a cabal of child-trafficking paedophiles, or whatever — but it was still a violent attack on the United States. No matter how you describe it, that’s how the real Deep State is going to treat it.

The impact of that will make everything else feel like a LARP.

By “Deep State,” I’m referring to executive branch agencies populated with unelected officials, especially those involving national security, law enforcement and intelligence. The non-nefarious name for it is “the federal bureaucracy,” with the subset that includes the military, Central Intelligence Agency and Federal Bureau of Investigation known as “the national security state.”

What else is being said?

EBay Says It Will Pull QAnon Merchandise From Its Site – Forbes

‘Rudderless’ QAnon may reinvent itself after US election, warn experts – FT News

How QAnon’s lies are hijacking the national conversation – CNN

QAnon is a wide-ranging, completely unfounded theory that says that President Trump is waging a secret war against elite Satan-worship paedophiles in government, business and the media.

They have speculated that this fight will lead to a day of reckoning where prominent people such as Hillary Clinton will be arrested and executed.

That’s the simple version, but there are many offshoots, detours and internal debates that the total list of QAnon claims is enormous – and often contradictory. Adherents draw in news events, historical facts and numerology to develop their own far-fetched conclusion.

Where did it all start?

All the way back in October 2017, an anonymous user put a series of posts on the message board 4chan. The user signed off as “Q” and claimed to have a level of US security approval known as “Q clearance.”

Who believes in it?

The big social media companies have tightened their rules about QAnon content and taken down thousands of Q-supporting accounts and videos.

But social media and opinion polls indicate there are at least hundreds of thousands, if not millions, of people who believe in at least some of the bizarre theories offered up by QAnon.

What impact has it had?

If you’re an enemy of QAnon, expect them to drive hashtags and co-ordinate abuse towards you. Their targets include politicians, celebrities and journalists who they believe are covering up for paedophiles.

And now It’s not just threatening messages online. Twitter took mass action against QAnon accounts because of the attack on the Capitol, which saw 5 deaths – including an on-duty Capitol police officer – and because of the potential for further “offline harm.”

For many believers, QAnon forms the foundation of their support for President Trump.

Mr Trump has, unwittingly or not, retweeted QAnon supporters, and prior to the election his son Eric Trump posted a QAnon meme on Instagram.

One outspoken QAnon supporter, Marjorie Taylor Greene of Georgia, was elected to the US Congress in November.