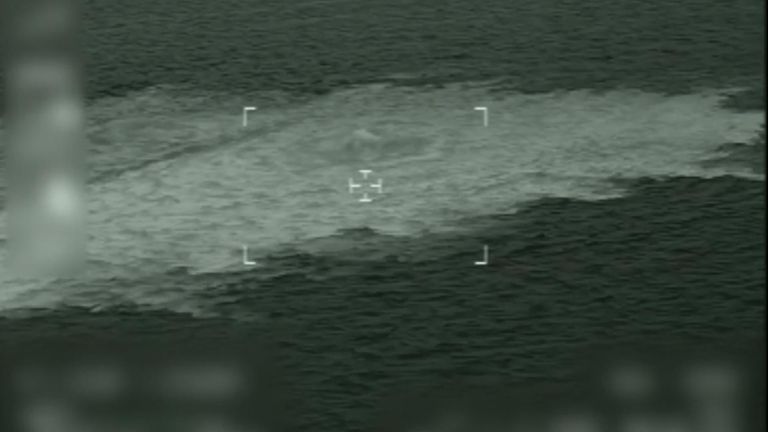 Gas pipelines were ‘sabotaged’, as major gas leaks were detected prior to explosions on Nord Stream 1 and Nord Stream 2.

Seismologists recorded what they think were explosions before gas began pouring out of two Russia-to-Germany pipelines under the Baltic Sea.

EU Commission chief Ursula von der Leyenagreed the leaks were caused by sabotage and warned of the “strongest possible response”.

Two leaks were discovered on the gas pipeline, which Moscow shut down earlier this month in retaliation for Western sanctions over Russia’s war in Ukraine.

This coincides with imported gas leaks from the United States to the EU.

It’s unclear what caused the blasts but they are the result of “deliberate actions”, according to Denmark’s prime minister, Mette Frederiksen.

Her Polish counterpart, Mateusz Morawiecki, called it “an act of sabotage”.

Images and videos released by the Danish military showed a huge area of gas bubbling on the surface of the Baltic Sea. The largest disturbance has a diameter of more than one kilometre, the military said, and the smallest covers around 200 metres.

The Swedish National Seismic Network said two “probable explosions” had been recorded in the area of the gas leaks.

At 1,200 km in length, Nord Stream 1 has the capacity to carry up to 170 million cubic metres of gas per day (or 55 billion cubic metres per year). Russia has been accused of manipulating supplies after being hit with six rafts of EU sanctions in the aftermath of the Ukraine war. Flows reached 20% of maximum capacity in the summer before the pipeline was shut down.

Nord Stream 2, which was built in parallel to the original conduit, was supposed to double its total capacity to an annual 110 billion cubic metres, but the project, which drew harsh criticism from Poland, the Baltic states and Ukraine, never received authorisation.

“Today’s sabotage of Nord Stream is a stark reminder of our energy infrastructure’s exposure to risks,” said Simone Tagliapietra, an energy fellow at the Bruegel think tank.

Princess Beatrice leads support for Mike Tindall as he’s voted out of I’m A Celebrity: ‘Just the greatest’