The Afghan Taliban, the government of Afghanistan, hails victory as all US troops leave Afghanistan. The Taliban call this a ‘historic moment’ and says the country has now gained ‘full independence’. Wikipedia has been updated to show an Afghanistan victory as the last US military plane leaves Kabul Airport.

Taliban spokesman Zabihullah Mujahid said that “American soldiers left the Kabul airport, and our nation got its full independence”.

The US confirmed its last forces withdrew ahead of a Tuesday deadline, ending America’s longest war and a frantic two-week evacuation effort. The Taliban took over the country in a matter of days earlier in August.

The US has officially withdrawn from Afghanistan on Tuesday, ending almost 20 years of occupation in the country with over a million Afghans killed in the conflict. Celebratory gunfire and fireworks light up part of the night sky in Kabul after the last US aircraft took off from the Hamid Karzai airport early on Tuesday.

What a shot. Doesn't get more symbolic than this

Last US troops take off from Kabul marking an end to 20 years of US military presence in Afghanistan pic.twitter.com/TD0duGdvM8

Taliban fighters fired their guns into the air in celebration in the Afghan capital as the United States completed the withdrawal of it forces from Afghanistan, nearly twenty years after it invaded the country following the September 11, 2001 attacks on America.

As last planes out of #Afghanistan land in Qatar — joining 1000s of refugees hosted by the Qataris — think how close we came to losing Qatar as a Gulf base. In 2017, Trump nearly tanked the relationship during Saudi’s blockade. Biden wisely has recognized strategic partnership.

Marine General Frank McKenzie, the head of the US Central Command, made the withdrawal announcement at a Pentagon news briefing on Monday after the last troops sent to evacuate Americans and Afghans at risk following the Taliban’s return to power flew out of Kabul.

A rather poignant shot of Major General Chris Donahue. The last American Soldier to leave Afghanistan. 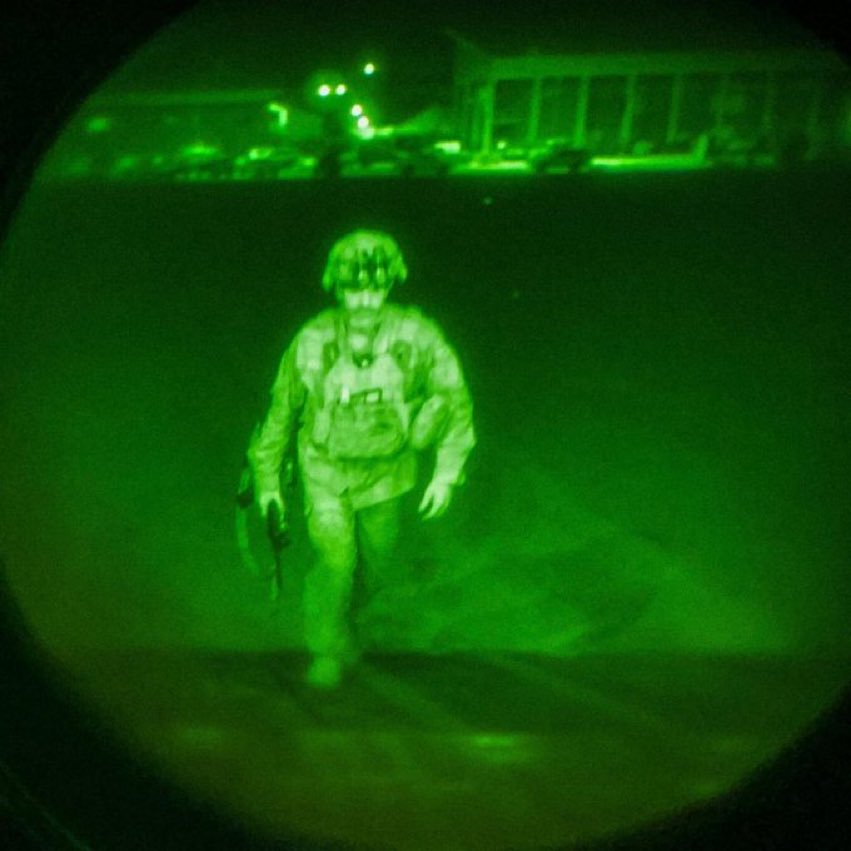 The final flight took place under heavy security following two attacks on the two-week evacuation operation by Islamic State Khorasan Province (ISKP) – one a suicide bombing that left at least 175 people dead, including 13 US troops.

‘Calm’ in Kabul after US troops withdraw

Kabul residents woke up early on Tuesday under full control of the Taliban after the complete withdrawal of US troops from Afghanistan.

Our reporter on the ground said there’s “a lot of unanswered questions” now as the new government of Afghanistan needs to start to rebuild the country.

However, the Taliban has revealed that it is taking a pragmatic approach to governance and planning an “inclusive caretaker government”, which will include leaders from all ethnicities and tribal backgrounds.

Afghanistan: the US ‘blew up military equipment after Kabul bomb attack to stop it falling into wrong hands