Why do some countries celebrate Christmas on December 24? 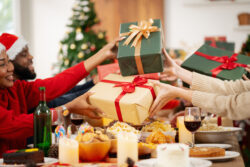 While Brits celebrate Christmas Day on December 25 every year, you may be surprised to hear that a number of countries gather with loved ones for their festivities the day before, on Christmas Eve.

In most parts of Eastern Europe and Scandinavia, presents are traditionally exchanged on the evening of December 24.

There’s more traditions from around the world which we haven’t adopted over here, like having a KFC dinner – a favourite in Japan.

Here’s everything you need to know about the countries celebrating Christmas on December 24 and why they do it.

Which countries celebrate Christmas on December 24?

Many European and Latin American countries exchange presents and begin their celebrations on the 24th.

Countries that observe this tradition include the Czech Republic, Poland, Germany, Switzerland, Austria, Norway, Denmark, Iceland, Sweden, Argentina, Colombia, Brazil – but this is not an exhaustive list.

In Germany, they call it Heiligabend Bescherung – and it’s actually the reason why the Royal Family swap gifts on Christmas Eve too.

It’s reported that, due to the royals’ German heritage, they have kept this tradition for over 200 years.

Some families will exchange gifts at midnight so their celebrations extend into the 25th (Picture: Getty Images)

December 24 represents the start of Christmas for these countries and rather than being an all-day occasion, it doesn’t typically start until the afternoon.

Shops tend to stay open for last-minute shoppers until the early afternoon and festivities don’t start until the evening, when Christmas dinner will be served and presents may be exchanged.

Some people wait until midnight to open their gifts while others wait until the next morning.

On December 25, shops will remain closed so most people will mark the day with family or friends.

Many will head to church at midnight on Christmas Day (Picture: Getty)

Why is Christmas celebrated on December 24?

Throughout history, December 25 for these countries is considered more of a religious holiday and ‘holy day’ spent resting and worshipping, rather than a day of celebrations.

The countries who celebrate on December 24 are predominantly Christian, too, and a Christian liturgical day always starts and ends at sunset each day.

Therefore, Jesus is considered to have been born at 5pm on December 24, meaning his birthday ends on the same time on December 25.

This is why tradition dictates that Christmas dinner is eaten on December 24 and Christmas breakfast on the morning of the December 25.

So in essence, Christmas is spread out across two days.

Does that mean they consider December 24 Christmas Day?

No, just because they mainly celebrate Christmas on Christmas Eve does not mean that December 25 is not considered Christmas Day.

The dates and the meaning attributed to them remain the same, they are just observed differently from country to country.


MORE : 39 years of UK video game Christmas charts – what was number one when you were young?


MORE : When do the Christmas sales start?


MORE : Three-quarters of young people ditching turkey for pizza or curry at Christmas

No, the reason isn’t just impatience.