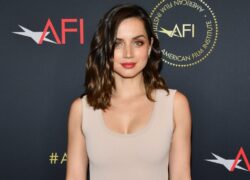 A judge has allowed two unimpressed fans to sue Universal for a ‘misleading’ movie trailer, it has been claimed.

Conor Woulfe and Peter Michael Rosza took legal action against the hugely successful studio in January – explaining that they had seen a trailer for 2019 flick Yesterday, with Ana de Armas in the footage.

The pair, who are fans of the Knives Out actress, rented the film on Amazon Prime shortly after, each paying $3.99 for the pleasure.

However, they were unhappy to find that the 34-year-old had been axed from the final cut, and launched legal action against Universal.

They are reportedly seeking $5million for the class action suit, claiming that they would not have purchased the rental had they known she didn’t feature.

According to BBC News, California US district judge Stephen Wilson has ruled that their lawsuit can go ahead.

Film bosses reportedly attempted to have the case dismissed under free speech rights, with their lawyers arguing that it is an ‘artistic, expressive work,’ explaining the general plot of the film, and should be considered ‘non-commercial’ speech.

They also argued that it’s not unusual for trailers to feature footage that does not end up in the final cut of the film, and that the move could encourage many more unhappy viewers to seek similar damages.

The judge is thought to have rejected this, ruling that the trailer is subject to the California False Adverting Law.

The outlet reports that he wrote: ‘Universal is correct that trailers involve some creativity and editorial discretion, but this creativity does not outweigh the commercial nature of a trailer.

‘At its core, a trailer is an advertisement designed to sell a movie by providing consumers with a preview of the movie.’

He also added that the false advertising law should only apply when a ‘significant portion’ of ‘reasonable customers’ could be misled by the teasers – in the case of the Yesterday trailer.

The 2019 film, starring Himesh Patel in the lead role beside Ed Sheeran and Lily James, follows the story of Jack – who wakes up after an accident to find that no one else seems to know of the Beatles.

What does Kate Hudson want for Christmas? A role in Knives Out 3

Kate Winslet slams Titanic body shaming she was subjected to: ‘I wasn’t even f**king fat’

Instead of enlightening everyone about the group, he performs the songs himself and takes credit for the tracks.

Ana was originally lined up to appear in the film alongside Himesh, with their characters sparking a romance which was featured in the trailer.

However, she found her role on the cutting room floor after audiences were dissatisfied with their romance, wanting Jack to focus on his budding romance with Ellie (Lily).


MORE : Liz Hurley ‘drops everything’ to be in son Damian’s first feature film