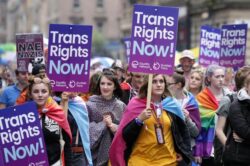 Scotsman says In a move that will spark yet another constitutional battle between the SNP and Westminster, the Scottish Secretary Alister Jack confirmed ministers would be making its first ever use of a Section 35 order, which stops a Scottish bill from becoming law.

Nicola Sturgeon labelled the move a “full-frontal attack” on the Scottish Parliament, and warned it could be the first of many.

Announcing the decision, Mr Jack said: “I have decided to make an order under section 35 of the Scotland Act 1998, preventing the Scottish Parliament’s Gender Recognition Reform (Scotland) Bill from proceeding to Royal Assent.

“After thorough and careful consideration of all the relevant advice and the policy implications, I am concerned that this legislation would have an adverse impact on the operation of Great Britain-wide equalities legislation.

“Transgender people who are going through the process to change their legal sex deserve our respect, support and understanding. My decision today is about the legislation’s consequences for the operation of GB-wide equalities protections and other reserved matters.

“I have not taken this decision lightly. The Bill would have a significant impact on, amongst other things, GB-wide equalities matters in Scotland, England and Wales. I have concluded, therefore, that this is the necessary and correct course of action.