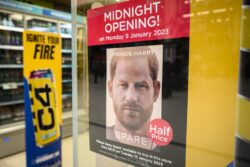 The duke’s autobiography is on sale from today, detailing his life inside the royal family (Picture: Getty)

Following on from a round of television interviews, Prince Harry’s long-awaited autobiography, Spare, hits the shelves today.

The memoir was accidentally released early in Spain last week, leading to days of leaked stories that whipped up a media frenzy.

From a frozen royal todger to the Queen joking about Harry’s bald patch in their last ever conversation… here Metro takes a look at ten of the wackiest reveals from Spare.

■ The King still wants his favourite old teddy bear with him for comfort after being bullied as a child. ‘Teddy went everywhere with Pa,’ Harry reveals. ‘It was a pitiful object, with broken arms and dangly threads, holes patched up here and there.’

■ Harry’s manhood was frostbitten at William and Kate’s wedding – after a charity trip to Antarctica before the big day. Harry writes: ‘While the ears and cheeks were already healing, the todger wasn’t. It was becoming more of an issue by the day.’ He applied Elizabeth Arden cream to his crown jewel.

■ Harry reveals he was circumcised as a youngster, saying: ‘While it’s absolutely true that the chance of getting penile frostbite is much greater if you’re not circumcised… I was snipped as a baby.’

■ Harry joked with the Queen about his bald patch just four days before she died. During their final phone call they discussed the ‘chaos’ at No.10 and the severe UK drought. Harry quipped that the grass was like his head – balding and brown in patches. It made the Queen laugh.

■ Meghan was offered Marmite crumpets when she first met Charles and Camilla for tea at Clarence House – and didn’t wear much make-up because Charles ‘didn’t approve of women who wore a lot’.

According to the memoir, Meghan’s request to borrow Kate’s lip gloss didn’t go down too well (Picture: Getty)

■ Kate pulled a face when Meghan borrowed her lip gloss during an ‘awkward moment’ in 2018. Harry claims Meghan turned to the princess for help because she had forgotten her own gloss before the Waleses’ Royal Foundation Forum. He says Kate, taken aback, went into her handbag and reluctantly pulled out a small tube. ‘Meg squeezed some onto her finger and applied it to her lips. Kate grimaced.’

■ When Harry first told William and Kate he was dating Meghan Markle in 2017, ‘Willy’ told him to ‘f*** off!’ They were Suits Superfans. ‘I was baffled until Willy and Kate explained that they were regular — nay, religious — viewers of Suits,’ Harry recalled. ‘All this time I’d thought Willy and Kate might not welcome Meg into the family, but now I had to worry about them hounding her for an autograph.’

Charles and Camilla wanted the Princess of Wales to change her name to Katherine with a K, says Harry (Picture: PA)

■ When Meghan threw her arms around Prince William on their first meeting, it ‘freaked him out’. Harry recalled: ‘He recoiled. Willy didn’t hug many strangers. Whereas Meg hugged most strangers.’

■ Charles and Camilla wanted Kate to change her name to Katherine with a K – because too many people in the family had the initial C.

■ Stepmother Camilla changed Harry’s bedroom at Clarence House into her dressing room, shortly after he moved out.

From a frozen royal todger to the Queen joking about Harry’s bald patch.