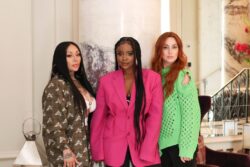 Sugababes are reportedly at the centre of a ‘record label bidding war’ (Picture: Press Shot)

They surprised fans by dropping their previously ‘lost’ album on Christmas Eve and now the Sugababes are reportedly at the centre of a bidding war between record labels.

The original members of the band – Mutya Buena, 37, Keisha Buchanan, 38, and Siobhan Donaghy, also 38 – reunited in 2012 under the name Mutya Keisha Siobhan and signed a £1,000,000 deal with Polydor Records, which resulted in just one single.

Ahead of their 25th anniversary next year, the trio have reclaimed their original band name, completed a UK tour and even shut down the field at Glastonbury festival.

Their album, The Lost Tapes, rocketed to number two on the iTunes chart, piquing interest from record labels almost a decade after their Polydor deal turned south.

Last year, a 20th-anniversary re-release of their debut album One Touch reached number 18 in the UK album charts, giving it a new peak after originally charting at number 26 upon its release in 2000.

A music insider told The Sun: ‘There are lots of Nineties and Noughties acts which reunite and it’s a bit cheesy and full of nostalgia, but the original Sugababes are actually cool, credible artists.

The original line-up of the group completed a UK tour earlier this year (Picture: Lorne Thomson/Redferns)

‘They have really impressed people at the major labels this year with their voices. The reaction from fans proves they are really a viable act to have huge success with new music.

‘They have some great ideas for songs and reckon they can win over a whole new generation of Sugababes fans.

‘The hope is that they will sign to a label at the beginning of the year and have new music out at some point in the next 12 months.’

Sugababes surprised fans when they dropped their ‘lost album’ on Christmas Eve (Picture: Jeff Spicer/Getty Images for The National Lottery)

Band member Keisha previously told fans on an Instagram live: ‘We just have to be motivated to [record new music] and passionate about it and once we are actually in the studio it flows really easily for us. But it’s about getting us all on the same page on the same date and the pandemic makes it really tricky.

‘It just has to be organic and be on the same page as far as our schedules are concerned.’

Siobhan added: ‘There’s nothing concrete at the moment, but we are working on stuff all the time and definitely new music.

The pop icons shut down the field at Glastonbury this summer (Picture: Ben Birchall/PA Wire)

‘We love making music together and that’s something we’re going to continue to do. And hopefully it won’t be too long now, now that we can be in the studio together again.’

The group were hailed the ‘queens of Christmas’ earlier this month when they surprised their fans by dropping their lost album eight years after it was originally meant to hit shelves.

In a post on Instagram, the trio wrote: ‘This has been a year of incredibly positive moments for us as a band. We wanted to do something to say a huge thank you to everyone who has supported us on this journey.

‘We wrote this album almost 8 years ago and remember the magic we felt at the time.

‘For various reasons beyond our control it didn’t get an official release, so it’s with great pride that The Lost Tapes gets a fully independent release from us today.’


MORE : Sugababes hailed ‘Queens of Christmas’ as they finally release The Lost Tapes album after 8 years


MORE : Sugababes offer advice to Glastonbury headliner Sir Elton John after shutting down field at 2022 festival: ‘We’ll fill him in’

They surprised fans with a new album on Christmas Eve.