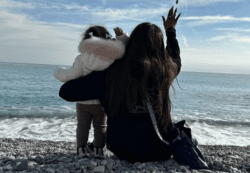 The pair attended a party and headed to the beach together (Picture: Instagram/naomi)

Naomi Campbell has celebrated the new year by sharing some rare snaps of herself with her 19-month-old daughter.

The supermodel took to Instagram on Monday to mark 2023 with pictures from her New Year’s Eve celebrations.

She brought her tot – whose name and face she keeps private – along with her to a swanky bash hosted by PrettyLittleThing founder Umar Kamani.

For the glittering party the 52-year-old opted for a white floor-length gown with matching cape, featuring silver embellished cut-outs.

Alongside video of the fireworks and streamers let off as the gathering officially rang in the new year, she also shared a few pictures featuring her little girl.

In both, Naomi was photographed from behind and carrying her daughter in her arms, who was dressed in a white lace dress and had a bow in her hair.

Naomi carried her toddler in her arms in a matching white outfit (Picture: Instagram/naomi)

The supermodel and her ‘little bean’ were surrounded by fashion’s finest at the bash (Picture: Instagram/naomi)

She then added a photo of them snuggled up together in cosy coats on the beach, waving to a passing boat in the distance.

‘Happy New Year! Darlings May God keep you and your family happy and healthy throughout the year,’ the fashion icon wrote in the post’s caption.

She continued her message: ‘May God’s presence never leaves your heart. To each new chapter of your life, may the Lord grant you His grace and strength in 2023 Happy New Year! !!’

Praising her hosts for the evening and referencing her daughter adorably as her ‘little bean’, she added: ‘Thank you @umarkamani @nadaadellex for your embrace of my little bean and I. BEST HOSTS Amazing heartfelt night .. Love Naomi ❤️🙏🏾 #newyear #newyear2023’

Naomi’s famous pals popped up in the comments, including Liz Hurley’s son Damian, who simply wrote: ‘LOVE YOU ♥️’

Naomi occasionally posts snaps with her daughter, but her face is always kept private (Picture: Instagram/naomi)

Naomi announced that she had secretly become a mum aged 50 in May 2021, when she shared the surprise news of her daughter’s arrival with the world.

‘A beautiful little blessing has chosen me to be her mother, So honoured to have this gentle soul in my life,’ she wrote next to a picture of her baby’s feet resting in her hand.

Body found in pond now being treated as murder

‘There are no words to describe the lifelong bond that I now share with you my angel. There is no greater love.’

Since then, she has revealed that her little girl was sleeping 12 hours a night at just two months old, thanks to a ‘great baby whisperer’.


MORE : Stacey Solomon might’ve accidentally revealed her baby’s gender and you can call us Sherlock from now on