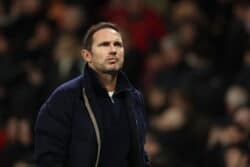 Frank Lampard could be set to lose his job as Everton manager (Picture: Getty)

Frank Lampard admits his Everton future is ‘not under his control’ with the Chelsea legend in danger of a sacking after yet another defeat on Friday.

The Toffees crashed out of the FA Cup with a 3-1 loss to Manchester United at Old Trafford to mark their sixth defeat in their last seven matches.

Everton are also already out of the Carabao Cup and are currently 18th in the Premier League, inside the relegation zone.

Toffees boss Lampard was quizzed about his future at the club following the defeat to United and told ITV: ‘That’s not under my control.

‘This league can change very quickly and when you’re in a difficult run you have to work really hard to get out of it but it can change.

‘The players were good, we had the better chances. Marcus Rashford was the difference.’

‘Frank Lampard has always been a player and person off the person that won’t run away from things from not going well,’ Wright-Phillips told the BBC.

‘He is the type of person to try and solve it or try and make the situation a lot better.

‘He has inherited a lot of problems. They’ve got injuries and there are individual mistakes, which you can’t really coach out of players.

‘I’ve seen them play a few times, particularly against Manchester City, and they look like they shouldn’t be in the position they are. The problem they have is keeping that performance throughout all the other games.

‘If they go with that same mentality they will cause a lot of teams problems. They just have to be difficult to beat because they have the players to spring counter-attacks. From there you can build your confidence up a bit and kick on.’

Will the Toffees sack the Chelsea legend?