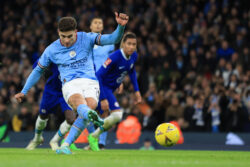 Manchester City coasted into the fourth round of the FA Cup as Chelsea’s last hope of a domestic trophy this season was extinguished in emphatic fashion at the Etihad Stadium.

Goals from Riyad Mahrez, Julian Alvarez and Phil Foden ensured a home fourth-round tie with Oxford or Premier League leaders Arsenal was in the bag by half-time, while Mahrez got a fourth from the spot late on.

Chelsea did not muster a shot in anger during the first half and while losing twice in four days to the reigning champions is no disgrace in itself, their tepid performance increases the pressure on boss Graham Potter.

Blues fans chanted the names of former owner Roman Abramovich and Potter’s predecessor Thomas Tuchel during the game, with the current coach’s side having won one of their last ten domestic games, losing six.

And when Omari Hutchinson saw a long-range shot dribble wide with 17 minutes left, the Blues supporters sarcastically sang: ‘We’ve had a shot.’

There could be no doubting the quality City showed in quickly making what should have been a tough third-round challenge into a formality.

Mahrez, match-winner in Thursday’s 1-0 league victory, set them on their way with a brilliant curling free-kick into the top corner in the 23rd minute.

Four minutes later, Kai Havertz stuck up an arm in the box to prevent Aymeric Laporte getting in a header and referee Rob Jones awarded the penalty after viewing a pitchside monitor.

World Cup-winner Alvarez, taking responsibility in the absence of Erling Haaland, engaged in a conversation with goalkeeper Kepa Arrizabalaga before striking his spot-kick into the corner, under Kepa’s outstretched hand.

It was 3-0 in the 38th minute when Kyle Walker played a smart pass, Mahrez cut the ball back and Foden side-footed it home from the edge of the six-yard box.

Striker David Fofana signed from Molde this week was on the Chelsea bench and was brought on at half-time in place of Havertz, while Potter also threw Denis Zakaria on in place of Mateo Kovacic. Chelsea had more of the possession and territory in the second half, although that seemed as much to do with the hosts easing off as their own exertions.

Six minutes from time City had a second penalty when Foden was fouled by Kalidou Koulibaly and Mahrez fired into the roof of the net. ‘It’s good to have played like the way we played and to score four and keep a clean sheet is a good day for us,’ said Mahrez. ‘Every season we try to be involved in every competition. We’re still in all competitions and have to keep going.’

Blues supporters also paid tribute to their former player and manager Gianluca Vialli who lost his battle with pancreatic cancer, aged 58, on Friday.

There could be no doubting the quality City showed.