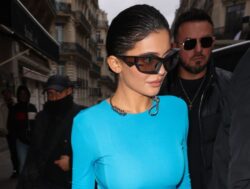 Kylie Jenner’s fashion choices have seen her come under this week for first wearing a lifelike lion’s head, and now she’s been criticised for wearing a controversial necklace that resembles a noose.

On Monday Kylie wore a sleek black dress which had the massive animal accessory attached to the side when attending the Paris fashion week Schiaparelli show.

Turning heads, there were mixed reactions about the outfit, with Peta saying it might have been a message against trophy hunting.

But Carrie Johnson, wife of the former Prime Minister Boris Johnson and a keen animal rights campaigner shared a photo from the show and wrote that it was ‘grim,’ adding: ‘Real or fake this just promotes trophy hunting. Yuck.’

However, the very next day Kylie made yet another divisive fashion choice.

Snapped while still in Paris, on Tuesday, the 25-year-old wore a tight electric blue dress and glittery pink boots from Givenchy, however she chose to pair them with the problematic piece of jewellery.

Posting three photos of her outfit to Instagram on the day, the necklace was clearly visible.

However many people weren’t happy and made their feelings known on other social media sites like Twitter.

This person didn’t hold back in their opinion (Picture: Twitter)

Debuted in Givenchy’s spring 2022 collection in October 2021, the design houses creative director Matthew M. Williams came under fire for sending models down the runway in necklaces that resembled a noose.

It was slammed for being insensitive towards suicide and the noose’s history with slavery was also pointed out.

At the time Diet Prada, an Instagram account focused on calling out the fashion industry for issues including copying other brands’ designs and using offensive imagery, wrote: ‘You’d think the industry would’ve learned not to put things that resemble nooses around a model’s neck … really makes you wonder how no one noticed, but alas … history repeats itself.’

When asked by The Guardian for comment, the French couture house said it ‘did not have an official response’.

Everyone Else Burns review: Simon Bird’s uneven sitcom with hit and miss one-liner

A year earlier Burberry was in hot water after producing a hoodie with a noose design, however it apologised.

‘We are deeply sorry for the distress caused by one of the products that featured in our A/W 2019 runway collection,’ Burberry’s chief executive officer Marco Gobetti said in a statement to CNN.


MORE : Kylie Jenner blasts speculation she used her children to ‘cover up for Balenciaga’

It came after the headline-grabbing lion’s head dress.