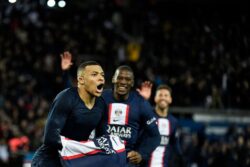 Kylian Mbappe scored a last minute winner against Strasbourg for PSG in his first game back since his World Cup heartache (Picture: Getty)

Kylian Mbappe insists he will never get over his World Cup heartbreak but will not waste time embarking on a war of words with Argentina’s controversial goalkeeper Emiliano Martinez.

The France forward cemented his status as the heir apparent to Lionel Messi in Qatar, producing a series of outstanding performances, culminating in an historic display in the final.

Mbappe became the first man since Sir Geoff Hurst in 1966 to score a hat-trick in the final and also kept his nerve in a penalty shootout which ended in defeat after Martinez’s excellence, and highly contentious gamesmanship, proved decisive.

The Golden Boot proved little consolation for the 24-year-old who subsequently became an unlikely target for Argentina’s players, and Martinez in particular, during Argentina’s riotous post match celebrations.

Martinez was filmed asking for a minutes’ silence for Mbappe in the dressing room after the game, and courted more controversy during an open-top bus parade back in Buenos Aries by holding a doll covered by a picture of the PSG star’s face.

While Messi is still enjoying an extended break, Mbappe returned to action last night for the Ligue 1 champions and made a triumphant return in his club teammate’s absence, scoring a last minute winner from the spot in a 2-1 win over Strasbourg.

Asked after the game for a response to the Aston Villa No.1’s trolling, Mbappe said: ‘They are not my problem. I don’t have energy to waste on such futile things.

’ll never digest it. But like I told my coach and teammates, there’s no reason that my club should pay for a defeat with my national team, it’s two different situations.

‘The message was simple – it was to show that, whatever goes on with the national team, PSG is a separate thing and I’m still determined to bring every trophy to the capital.’

And new Villa boss Unai Emery insists he will speak with the former Arsenal goalkeeper about controlling his emotions.

He said: ‘We are so proud of him. He won the World Cup, it’s amazing! Aston Villa fans can be very proud.

‘He’s coming back next week so we are expecting him to be ready for the game at Tottenham on New Year’s Day.

‘I want him to rest now because after all that hard work and emotion, he needs it. He had an excellent World Cup and we’re looking forward to having him back.’

The Argentina goalkeeper’s antics have been heavily criticised.