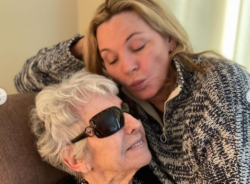 Sex And The City star Kim Cattrall has confirmed that her mother has died aged 93.

The Samantha Jones actress broke the news on her Instagram page while also sharing precious photos of her late mum, Shane Cattrall.

‘Oh, Kim, I’m so sorry. What a wonderful woman,’ another penned.

A third said: ‘I am so sorry for your loss. I loved your mum and her sisters in Who Do You Think You Are. I hope her passing was peaceful. My thoughts are with you all.’

Kim’s mother, who welcomed her with partner Dennis Cattrall, worked as a secretary.

When Kim was three months old, her family immigrated to Canada from Liverpool and settled in Courtenay, British Columbia.

At 11, she returned to Liverpool when her grandmother became sick.

The Sex and The City star announced her mum had died on Instagram (Picture: Kim Cattrall/Instagram)

In January this year, Kim shared a poignant tribute to her late brother, Christopher, on what would have been his 59th birthday.

The star’s brother was just 55 when he took his own life in early 2018 and, taking to Twitter to pay her respects to her younger sibling, the Sex And The City star called for suicide prevention.

Alongside an old photograph of the pair, Kim wrote on Instagram: ‘Today would have been my baby brother Chris’s 59th b’day.

The Samantha Jones actress broke the news on her Instagram page.