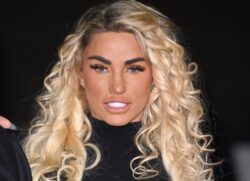 The former glamour model is on a mission to sport the biggest breasts in the country (Picture: WireImage)

Katie Price has undergone breast augmentation surgery for the 16th time in Belgium to reportedly fulfil her goal to own the ‘biggest boobs in the country’.

The former glamour model, 44, posted pictures of herself in a hospital gown and bed, strapped up to machines that were easing her into the upcoming operation.

All smiles, the mum-of-five was snapped entering the clinic and sported a green tracksuit with brown fluffy boots as her phone hung from a string around her neck.

The star was photographed ahead of her surgery by The Sun who also spoke to a source regarding the OnlyFans creator’s latest operation.

They claimed to be close to Katie and said: ‘Katie is getting massive 2120 CC implants.

‘She wants to have the biggest boobs in the country, and these will certainly set her on her way to that goal.’

The star was regularly in the press for her on again off again romance with Carl Woods (Picture: GC Images)

Checking into reception, the outlet also captured Katie being helped into wheelchair and escorted further into the premises to start prepping for the implant procedure.

Fans saw Katie recovering from the surgery on her Instagram stories before the famous face debuted her assets on a wild night out ahead of Christmas.

Sporting a Santa hat, the model popped out for some karaoke with friends and mimed the lyrics to Rihanna’s Umbrella for her followers.

Katie wore a white crop top that showed off her 16th boob job and donned her usual face of full glamour make-up for the festive affair.

Despite her foot being bandaged up, the celebrity partied the night away singing along to famous hits.

She broke both her feet in 2020 after jumping off a wall in Turkey (Picture: GC Images)

She was spotted outside a London hospital on crutches following an operation on her foot after breaking it on holiday in Turkey.

The star’s injuries date back to 2020 when she broke both feet jumping off a wall and had to be rushed straight to A&E.

Revealing she would need further hospital treatment before she was fully on the mend, Katie commented at the time that they looked like ‘something out of the movie Saw’.

Her most recent ‘boob job’ surgery came after the famous model claimed men were at the crux of all her financial woes.

She told the Times: ‘You don’t have to be a genius to work out that men are the downfall in my life. A million per cent.

‘All my dramas, my bankruptcy — everything is men. Always men.’

‘When you see exes gloat around, knowing you’ve paid for stuff, that’s the worst torment for me.

‘My triggers, when I’ve gone downhill, are men. And I’m a sucker for love. I used to need validation. Men’s approval. Wanting them to want me, but they don’t.’


MORE : Katie Price insists she’d earn money if she was ever sent to jail: ‘I’ll write a chapter for my next book’

And the breast is history.