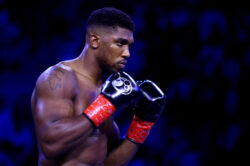 Deontay Wilder’s trainer Malik Scott believes Anthony Joshua will fight Gerald Washington in April and suggests the Briton is continuing to duck a fight against ‘The Bronze Bomber’.

Joshua is set to return to the ring in April with talk his next opponent could be Australia’s Demsey McKean.

Washington is another name in the frame, however. The 40-year-old, who is also trained by Scott, has been offered to the former world champion for his fight in the spring as Joshua seeks to get back to winning ways following back-to-back defeats to Oleksandr Usyk.

Scott is ‘very optimistic’ that fight gets made, telling Best Sports Betting Canada: ‘Gerald Washington is one of the leading names to possibly fight Anthony Joshua, It’s not a rumour, it’s an actual fact that he’s one of the options.

‘And it’s something Gerald is ready for. I keep telling people, Gerald is a big, strong, heavy handed guy. The physicalities are there, but what we’ve been working on is mental stamina. And fighting at the highest level, that’s more important than the physical.

‘I’m very optimistic the fight will get made, especially at this point with the move they’re trying to do for AJ, that’s what makes me optimistic about it because I know the mission they’re on with AJ. And that’s not the mission I’m on for Deontay and AJ.’

Eddie Hearn has outlined a three-fight plan for Joshua in 2023, believing a rematch against Dillian Whyte will follow his return in the summer before a huge showdown with Wilder or Tyson Fury later in the year.

Tentative talks between the Joshua and Wilder camps resumed last year, with Scott suggesting the fight was at one point discussed for April.

‘At one time it looked like we’re getting ready to get a Deontay-AJ fight made, then you hear AJ and his team want to do other things,’ Scott continued.

‘It seems like he’s ducking all my heavyweights. You have got to fight one of my heavyweights, man, we’re waiting on you over here. You’re ducking Deontay Wilder, Gerald Washington is ready to fight right now, in top condition, mentally and spiritually and physically.’

Wilder meanwhile is looking at a WBC final eliminator against Andy Ruiz but Scott says a ‘mystery opponent’ remains a possibility.

‘It’s down to the mystery opponent and Andy Ruiz Jr. Since AJ had made up his mind and does not want to fight Deontay right now, we’re down to Andy Ruiz and the mystery guy. The mystery fighter is not as guaranteed to happen as the Ruiz fight. If you’re looking at it from the business perspective, it’s most likely going to be the mandatory shot, Ruiz.

‘It’s looking like Ruiz, but in this game there’s no telling as Deontay is big-time boxing. When you’re bigtime boxing, and as sad or as unfortunate it may sound to some people, mandatories don’t mean nothing. Fighters have stepped aside to make big, big fights happen.

‘This goes on in boxing, it’s what the fans want or what makes business sense for the fighters and their team. It’s likely to be Ruiz but if not there are other negotiations going on as well.’