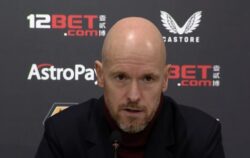 Manchester United manager Erik ten Hag as turned down the chance to send a final message to Cristiano Ronaldo following his move to Al-Nassr this week.

United were quick to terminate Ronaldo’s contract last month in the wake of the 37-year-old’s stinging interview with Piers Morgan in which he criticised the club’s decisions off the field, as well as Ten Hag.

Ronaldo, meanwhile, had been keen to sign for a Champions League club following his departure from United but the five-time Ballon d’Or winner has ended up signing a deal with Saudi Arabian club Al-Nassr worth around £175 million a year.

During their brief time together at United, Ten Hag showed no hesitation in dropping Ronaldo, while the Portugal international made it clear he was less than impressed with the Dutchman’s management style.

But following confirmation of Ronaldo’s switch to the Middle East, Ten Hag refused to speak about his former player after United’s 1-0 win over Wolves on Saturday.

Cristiano Ronaldo completed his move to Al-Nassr on Friday (EPA)

When asked to give his reaction to Ronaldo’s move and whether he believes his decision to drop the 37-year-old from his United side is now vindicated, Ten Hag replied: ‘No, I don’t talk about the past, let’s talk about the future.

‘We made a good step today, we have to win games.

‘It’s the first time we’re in the top four but it means nothing because it’s a long way to go.

‘It stinks!’ Rio Ferdinand hits out at criticism of Cristiano Ronaldo’s Al-Nassr transfer

‘Many games are coming up, we have to live from game to game, we have to win every game, collect three points every time, get in a position to win something this season, that is what we are aiming for.

‘But it demands hard work from everyone and, of course, a good plan.’

Ronaldo left United and has now signed a £175m-a-year deal with the Saudi Arabian club.