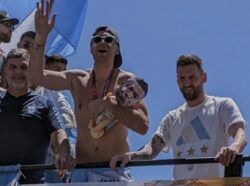 Martinez was Argentina’s hero in Qatar as his vital save in extra time to deny Randal Kolo Muani, plus his two stops in the shootout, played a key role in his nation’s victory over France in the final on Sunday.

During Argentina’s celebrations in the dressing room after their World Cup win, Martinez was filmed mocking Mbappe, who scored a hat-trick in the final to win the tournament’s Golden Boot.

And Martinez continued to poke fun at Mbappe during Tuesday’s bus parade as he was seen carrying a doll which had a picture of the France striker’s face.

To make matters worse, Martinez was standing with the doll next to Mbappe’s Paris Saint-Germain teammate Lionel Messi.

During the bus parade on Monday night, Messi laughed off a fan who threw a Teenage Mutant Ninja Turtle mask at him – which has also been used to taunt Mbappe in the past.

Speaking before Sunday’s final, Martinez was angered by Mbappe’s that South American football is ‘not as advanced as Europe’.

‘He never played in South America. When you don’t have this experience, it may be better not to talk about it.

‘But it doesn’t matter. We are a great team, recognised as such.’

The bus was due to go on an 18-mile route but Argentina’s players were forced to be airlifted back to the team’s training base on the outskirts of Buenos Aires after fans jumped from a bridge onto their bus.

Over four million people had gathered in Argentina’s capital to celebrate with the squad.

Martinez continues his show of disrespect towards the France striker.