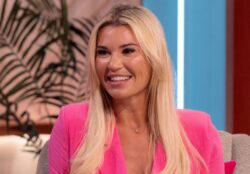 Christine will be fronting her own series (Picture: ITV)

Christine McGuinness is reportedly fronting a new documentary following her split from her husband Paddy.

The 34-year-old model, announced her split from the Top Gear star 49, last year after 11 years of marriage.

At the time, they explained that they were still living together in the family home, with their ‘main focus’ on continuing ‘loving and supporting our children.’

In 2021, the couple – who share nine-year-old twins Leo and Penelope, and six-year-old Felicity -released a BBC documentary, Paddy and Christine: Our Family and Autism, and admitted the past year has taught them a lot not only about themselves but also their relationship and their family.

And according to reports, Christine will be sharing her personal story in her titular feature length Unmasking My Autism.

A BBC source shared: ‘Christine was shocked by how autism is seen as something mostly affecting men and what felt like a gender bias in diagnosis.

‘The second film follows her on a journey in search of answers for the thousands of other women like herself in the UK, who are spending years undiagnosed or masking their symptoms to the detriment of their mental health,’ they added to The Sun.

Christine announced that she was also diagnosed with autism at the age of 33, declaring on Instagram ‘autistic and proud,’ and revealing there’s been little hints throughout her life that pointed to the condition, which she shares with her three children.

‘I got my diagnosis a few months ago,’ she penned.

‘I have felt different my whole life. Honestly, I am relieved to finally understand myself I have been confirmed as autistic. It’s strange, but I’ve noticed there are little hints throughout my life that I’m autistic and more like my children than I ever could have imagined.

WWE is bringing Money In The Bank to London in 2023: Tickets and date for historic show

‘My issues with food, my social struggles, how hard I find it to make friends and stay focused, and my indecisiveness.

‘The way I float through life reminds me of how my eldest daughter Penelope is. It all makes sense now. And as much as I’m not totally surprised, it’s still been emotional for me to accept, but it’s a relief as well.’

Autism is a lifelong developmental disability which affects how people communicate and interact with the world. According to the National Autistic Society, one in 100 people are on the autism spectrum and there are around 700,000 autistic adults and children in the UK.

People with autism often struggle to interact with other people, find it difficult to understand how other people think or feel, dislike things like loud noises or bright lights, get upset about unfamiliar situations and take longer to understand information, but the condition is on a spectrum and is different for everyone.

Evidence suggests that autism may be genetic and scientists have been attempting to identify which genes might be implicated in autism for some years. Autism is likely to have multiple genes responsible rather than a single gene. However, it is not caused by emotional deprivation or the way a person has been brought up.

There is no link between autism and vaccines and much research has been devoted to this issue over the years and the results have comprehensively shown this.

Christine McGuinness’ reps declined to comment when contacted by Metro.co.uk.


MORE : Stranger Things star Noah Schnapp comes out as gay: ‘I’m more similar to Will than I thought’

Christine has landed her own doc, according to reports.