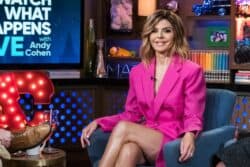 The Melrose Place actress confirmed her departure from RHOBH on Thursday, after eight years in the cast.

Ahead of season 13, she put paid to all speculation surrounding her future on our screens, telling People Magazine in a statement: ‘This is the longest job I have held in my 35 year career and I am grateful to everyone at Bravo and all those involved in the series.

‘It has been a fun eight-year run and I am excited for what is to come!’

Following the news, her former co-star and Sharon Stone seemingly discussed the move on social media and Andy  – who serves as executive producer across the many Housewives franchises – spoke out on Instagram.

Alongside a cartoon of the Days Of Our Lives star, he simply wrote: ‘An iconic run’.

Lisa joined the RHOBH fold as a full-time Housewife in season five, which aired in 2014, and has been a staple of the cast ever since.

She has made for a divisive figure during that time, going up against Kim Richards, Denise Richards and Lisa Vanderpump.

In the most recently season, she tussled with Kathy Hilton and Sutton Stracke, leaving viewers at home shocked by the explosive scenes.

Lisa has proved to be a divisive cast member (Picture: FilmMagic)

They made their feelings known at BravoCon in October, greeting the soap opera star with deafening boos when she appeared on stage.

Not put off by the less-than-welcoming reception, Lisa flashed her middle finger towards the audience, before laughing the reaction off.

During the panel, she addressed some of her lowest moments from season 12 and apologized for the way she came at her colleagues.

When the cast were asked about a moment they watched back and realized that they didn’t react in the best way, she reflected on a series of arguments she had with Sutton.

‘Both times I screamed at Sutton, I went, “Oh, my God!” When it happened, I didn’t remember it like that. So to see it back, I was mortified. Sorry.’


MORE : Pregnant Stacey Solomon shares she’s having ‘one of the worst days’ – before Joe Swash comes to the rescue


MORE : Raye is ‘crying on loop’ as she tops charts as independent artist after ditching record label: ‘It’s empowering’

She quit this week.