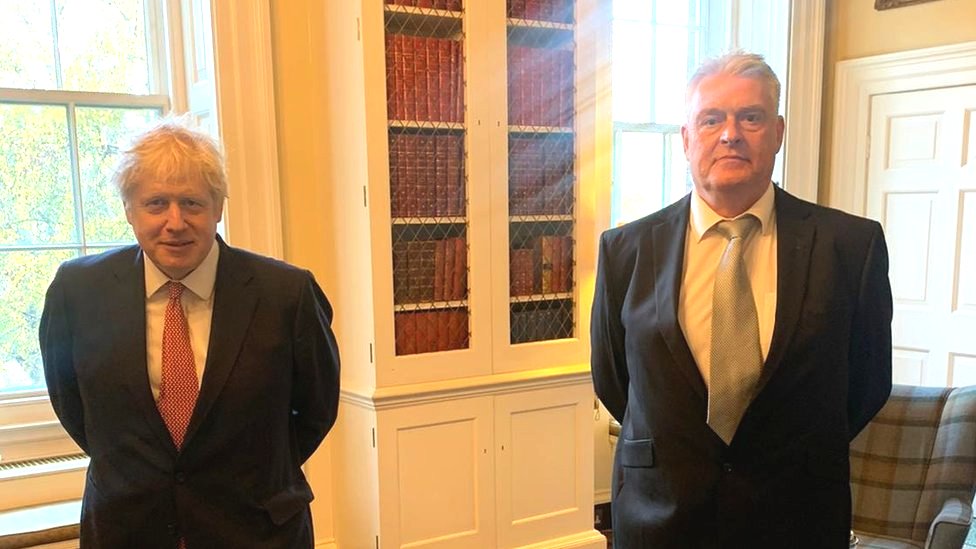 Boris Johnson and six tory MPs have started self-isolating after a No 10 meeting last Thursday when they came into contact with an MP who has now tested positive for Covid-19.

The PM’s period of isolation begins as the government prepares a policy relaunch. No 1o said a series of “critical announcements” would this week detail the PM’s “ambitions for the United Kingdom.”

Matt Hancock will hold a news conference later, which the PM had been expected to lead.

Hi folks, I’ve been instructed by our NHS Test & Trace scheme to self-isolate for two weeks, after being in contact with someone with Covid-19.

I’m in good health and have no symptoms, and will continue to lead on our response to the virus & our plans to #BuildBackBetter pic.twitter.com/yNgIme8lOz

PM to self-isolate. Did he ignore the rules?

The Independent says Boris self-isolating is the last thing the government needs. The paper says the PM had intended on being highly active and visible “during what was already going to be a busy two-week period.” They add the departure of Cummings and Cain means the PM needs to steady the ship, move on and show this “reset” is more than just “another unfulfilled headline.”

The Mirror claims, despite being told to self-isolate, the PM is still working from No 10. However, the Prime Minister’s spokesman said: “To enable the PM to carry out his full duties and with the agreement of medical advisors, he is working from his Downing Street office which he is able to access without any interaction with No10 staff.”

Despite lockdown, the PM hosted a half-hour breakfast meeting with a group of Tory MPs on Thursday, says the paper. Attending the meeting was Lee Anderson, who developed symptoms the next day and tested positive at the weekend. The Mirror says a photo of Johnson and Anderson show them not wearing masks and appearing to be less than two metres apart – drawing criticism.

Sky News says the prime minister has been forced to rethink his reset. They say Boris Johnson was planning to announce his policy vision for a post-pandemic, post-Brexit and post-Cummings Britain. And all this comes at the high-pressure point in Brexit trade negotiations, when a “major breakthrough” is needed.

Health Secretary Matt Hancock told Sky News today he has “no doubt” the prime minister will be able to “drive his agenda forward” via Zoom.

Boris “come round for breakfast”. Why didn’t he phone or Zoom?

We all know ‘Serco T&T’ isn’t working how convenient that this week suddenly it works and he can’t come out?#BorisTheLiar pic.twitter.com/pdLQbJsNnN

#BorisTheLiar isn't telling the truth about having to isolate.

It's a con to make us think that test and trace actually works and a convenient excuse to get out of PMQs and dealing with the utter mess that brexit has predictably become.

So why wasn't you following the guidlines you lump, working from home when possible, not mixing in other households and why the fck couldn't you use zoom if your meeting was that important. #BorisTheLiar #BorisHasFailedTheNation This guy runs the country!! FML 🤦🏾‍♂️ pic.twitter.com/UFeeSiASwo

The Evening Standard reports on the news that London has seen a record rise in Covid-19 cases, with more than 15,500 infections recorded in the capital in the last seven days.

“The new figures take the infection rate across the city to 173.7 per 100,000 population, up from the previous record of 158.5 last Thursday. The number of Covid patients in London hospitals also increased to 1,244 – the highest level in six months.”

MyLondon says the Havering, in East London, is the latest borough to rise to the top of the list for the worst coronavirus rate in the capital. The source explains why.

Speaking to MyLondon, Havering Council has put the rise in Covid-19 cases in the borough down to a number of factors, including a few businesses flouting lockdown rules and an increase in local testing capacity.

Mark Ansell, Havering Council’s director of public health, said: “Havering does have the highest rate in London at the moment.

“This is of enormous concern, particularly as Havering has a relatively old population with a high proportion of residents aged 60 and above who are most at risk of severe disease and death.”

A key development today has been the news of a new vaccine which has been found to be nearly 95% effective against the virus. The government in “advanced discussions” with US firm Moderna to secure doses of the jab by next spring.

The Prime Minister’s official spokesman said: “The news from Moderna represents another significant step towards finding an effective Covid-19 vaccine. Advanced discussions are underway to secure doses for the UK.”

“We have already secured early access to 350 million vaccine doses through agreements for six different vaccines, giving the UK the most likely chance of securing a safe and effective vaccine at the quickest speed.

“What we have done is prioritise agreements with vaccine developers who offer different types of vaccines, can provide early supply to the UK and have advanced manufacturing supply chains in place.”