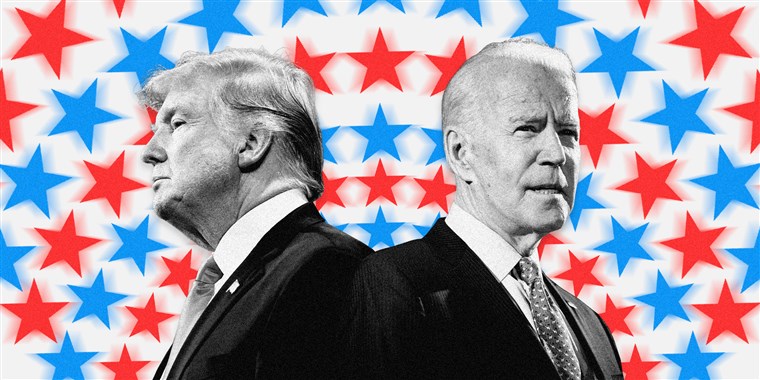 The US election is likely heading for chaos if key battleground states are unable to deliver decisive results – with the process potentially being dragged out until next year, a UK-based expert has warned.

President Donald Trump is currently trailing in most polls and even if he does eventually lose he will refuse to accept the legitimacy of the result, according to Professor Richard Johnson, a lecturer in US Politics and Policy at Queen Mary University. The professor says Trump will remain a potent force politically for many years to come.

The race to the White House comes to a head tomorrow as the Election Day finally arrives. This year’s presidential campaign race between President Trump and his Democrat challenger Joe Biden has largely been overshadowed by the coronavirus pandemic. Due to the pandemic, mail-in voting has surged in the US (60 million so far) – but the president has already suggested he may be prepared to launch a legal challenge, citing concerns over the postal ballots and fraud.

Dr Johnson explained the sheer size of the electorate created serious logistical challenges in terms of determining the result.

Speaking to the Express.co.uk Dr Johnson said: “The US electoral system is very decentralised so there isn’t going to be some kind of national announcement of the winner.

“Each individual state has its own rules about how it counts ballots, which ballots are eligible and so on.

“And they have until early December before they have to appoint their elector to the electoral college, which meets in mid-December.”

He said: “I think what Trump is probably thinking about is that he is hoping there might be a crucial state of two that is so close that he could put pressure on the legislature of that state to allocate their electoral college votes in his favour even if the result might appear to be in Biden’s favour or is just completely unknown.

“That would spark a legal challenge and that would be through the state courts initially but that could also be taken up to the Supreme Court.

“The Supreme Court can’t just come in and say Trump is the winner of the election but they can come in and say the Republican legislature of Pennsylvania is entitled to allocate their electoral college votes to Donald Trump.

“That is the first step where there can be kind of confusion.”

However, things could take another twist on January 20, when Congress meets to certify each electoral college votes.

It is believed the Democrats will take both the House of Representatives and the Senate, meaning both would be likely to rule against the President in such circumstance, according to projections from fivethirthyeight.com.

Dr Johnson said: “Usually this is just a ceremony that does not matter, but in a highly contentious election with some disputed votes, potentially Congress would have every right constitutionally to cast aside the electoral votes of a state that they thought might be in dispute and just not count them.

“There are a few different ways in which they could kind of shake them up a bit.”

He added: “I wouldn’t take that much notice of the national vote. The electoral college is what matters.

“If Trump says look I think I have won the electoral college, again it comes down to Congress certifying the winner in January.

“And at that point, if Congress certifies Biden the winner and Trump says no, in a constitutional sense that’s the end – you can’t appeal.

Dr Johnson believes Trump has a vested interest in not being seen to accept defeat.

He said: “I do think he wants to save face at the very least and if that means saying it was the judges or it was Congress that robbed him, he’s got somebody to point the finger at.

“Because he wants to remain politically potent after the election.

“He will certainly be the most significant Conservative figure in the United States, not just through the media but through Republican politics.

“He will be very significant in anointing the next candidate.

“I think he is where the Republican grassroots are.

“A lot of Republicans don’t like him and they tried to lead the party in a different direction before him and tried to resist him in the 2016 primaries.

“But ultimately what matters in some ways are the Republican voters who voted in Congressional primaries, Senate primaries and Presidential primaries and they seem to agree quite strongly with his policies.

“So I don’t we’ll see any radical repudiation even if he does lose in the short term.”

The Republican Party likewise had a vested interest in accommodating Mr Trump, because if they did not, the nightmare prospect remained that he could choose to run as an independent in four years time, Mr Johnson pointed out.

He said: “Last time a Republican President did that was Teddy Roosevelt in 1912 and it was disastrous for the Republican Party so they don’t want that to happen again.”

Dr Johnson stressed the contest remained very much in the balance – but added: “I think it is likely that Biden will win. There is a path to victory for Trump but it requires polls in Wisconsin and Pennsylvania to be a bit off.

“He needs Pennsylvania and at the moment he is kind of out of the boundaries – he’s not within the margin of error.”

My Tweets
We use cookies to help identify your computer so we can tailor your user experience, track shopping basket contents and remember where you are in the order process. WTX News Our Cookie Policy
US Election Live Updates, latest polls: A nation divided, as gun sales skyrocket
US 2020 Election Update – Live Page
To Top
Weekly