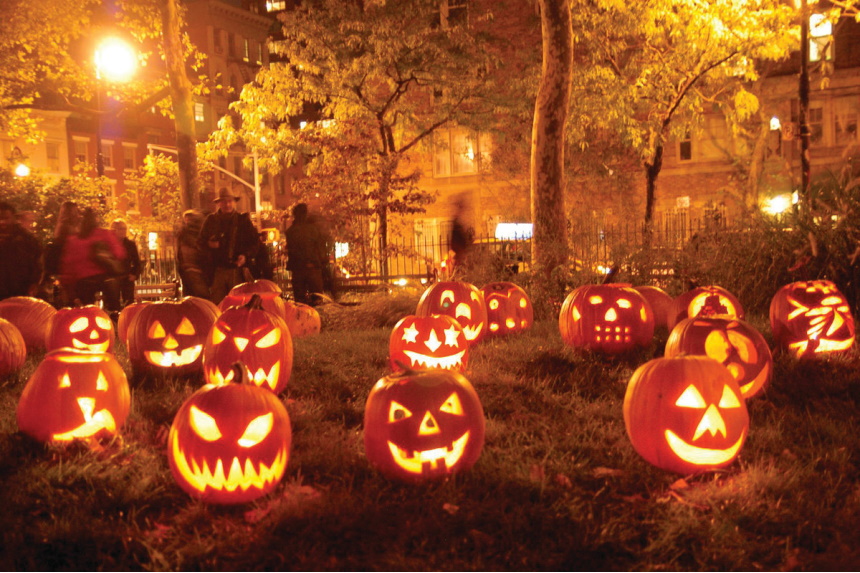 Happy Halloween! How did it start? The differences between UK and US celebrations and how it’ll be celebrated this year!

Halloween is always on October 31. Unlike some other festivals such as Easter, Lent, Eid and Diwali, the date does not vary each year.

The name is a shortened version of All Hallows Evening, which refers to the Christian festival of All Hallows’ Eve or All Saints’ Eve.

Halloween began as the festival of Samhain. It was part of the ancient Celtic religion in Britain and other parts of Europe.

At the end of summer, the Celts thought the barrier between our world and the world of ghosts and spirits got really thin and weird creatures with strange powers could wander about on Earth, so the Celts had a big party in hopes it would scare away the ghosts and spirits.

Later, with the Christian religion, the day became known as All Hallows’ Eve – the day before All Saints’ Day on 1 November.

Popularity in the USA

The US goes wild for Halloween

Halloween is really popular in the USA. Irish immigrants to the US raised the popularity of Halloween during the 19 century.

During the 20th century, it became more and more popular, with traditions like pumpkin carving and trick or treating becoming part of TV shows, books and movies.

Throughout Britain, Halloween has traditionally been celebrated by children’s games such as bobbing for apples in containers full of water, telling ghost stories and the carving of faces into hollowed-out vegetables such as swedes and turnips. These faces would usually be illuminated from within by a candle, the lanterns displayed on window sills to ward off any evil spirits.

The current use of pumpkins is a relatively modern innovation imported from the United States, as well as the traditions of ‘trick or treat.’

Brits tend to wear more traditional Halloween costumes, dressing up as ghosts, zombies, and other fearsome creatures. Unlike Americans who tend to stick to princess dresses and superhero costumes.

It’s rare for people in the UK to put up an excessive amount of Halloween decorations.

“You’ll rarely see anyone decorating their house with Halloween stuff, apart from maybe a pumpkin in the porch or something,” wrote a Quora user.

Trick-or-treating is more common in the US.

“We’re more likely to buy the Halloween sweets and eat them ourselves watching whatever spooky film they’ve put on telly for the occasion,” said one Reddit user.

“Mischief Night” is a thing in some regions of the US ― but it has origins in the UK.

According to Vox, New Jersey, Philadelphia and Pennsylvania celebrate the night before Halloween – known as “Mischief Night” ― an evening of pranks.

Elsewhere in the US, pre-Halloween hijinks are referred to as “Devil’s Night” and “Cabbage Night.”

Mischief Night, however, actually has origins in the UK, according to The Guardian. A similar tradition is observed in northern England and the Midlands region, where it’s known as “Miggy Night” and “Mizzy Night.”

How will Halloween be celebrated this year in the UK?

How will Halloween look this year?

From trick or treating to apple bobbing, the traditions of Halloween aren’t things you would immediately consider to be “Covid-safe”.

But Halloween isn’t completely cancelled. Depending on where you live.

In Scotland, trick or treating has been strongly discouraged by the government, with John Swinney telling parents going door-to-door “brings an additional and avoidable risk of spreading the virus”.

And with people banned from meeting other households indoors, Halloween parties are also definitely off the cards.

In Wales, Halloween falls during a 17-day firebreak lockdown, meaning meeting people from other households, either indoors or outdoors, is not allowed.

“We are asking people to stay home during the firebreak period to slow the spread of coronavirus and help save lives,” a government spokesman said.

Northern Ireland’s PHA has said it is important people continue to follow the restrictions, which prevent meeting indoors with other households and restrict the number of people who can meet outside to 15.

In England, Downing Street has suggested trick or treating can take place as long as the local restrictions are followed.

The prime minister’s official spokesman this week said: “The rules are those which apply to household mixing in general and what that means in practice is if you are in a very high alert level (Tier 3) then you cannot mix with other households indoors or in private outdoor spaces.

“If you’re in a high Covid alert level (Tier 2) then the rule of six applies in private gardens and outdoor spaces but households must not mix indoors.

“And in terms of the medium alert level (Tier 1), you can meet indoors and outdoors in groups of no more than six people.”

He added people would have to use their common sense.

My Tweets
We use cookies to help identify your computer so we can tailor your user experience, track shopping basket contents and remember where you are in the order process. WTX News Our Cookie Policy
Breaking: Three people attacked in France
Daily News Briefing: Nottinghamshire moves into tier 3 restrictions – with extra rules added!
To Top
Weekly