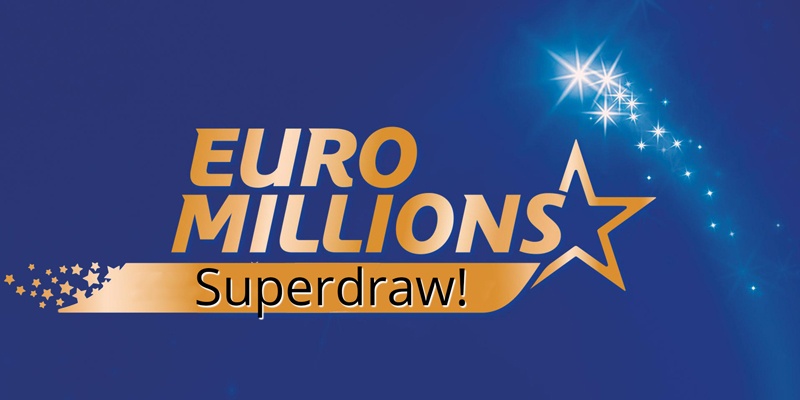 Euromillions have announced there will be a fourth Superdraw event this year. The Superdraw events give players a chance to win guaranteed €130 million (approximately £115 million) on Friday 20th November.

The Euromillions Superdraws are announced several weeks before the event takes place and the advertised jackpot is guaranteed to be put up for grabs, so you can plan your strategy now and make sure you don’t miss the opportunity to become an overnight multi-millionaire.

The jackpot is guaranteed because SUperdraws work a little different to ordinary draws. Whereas it normally takes many rollovers to create a nine-figure jackpot, the money for Superdraws comes from the Reserve Fund.

A percentage of the prize fund goes to the Reserve Fund in every draw, so special events and promotions such as Superdraws can be arranged when there is enough money in the pot. It doesn’t matter if the jackpot is much lower in the run-up to 20th November, or even if it is won in the draw immediately beforehand – the top prize will be boosted to €130 million.

The Reserve Fund has received a higher percentage of the prize pot since February, so the EuroMillions members have been able to schedule even more Superdraws. The upcoming event will be the fourth of its kind in 2020 – no other year has ever had so many!

Two of the three Superdraws this year have seen the jackpot won on the night. A Spanish player landed €130 million on 7th February, while another player – also from Spain – scooped the same amount in the most recent Superdraw on 25th September.

In between those wins, there was a Superdraw on 3rd July which did rollover. However, the jackpot was won in the very next draw. Again it was Spain which proved to be the lucky location, with a ticket holder from Valladolid snapping up €144 million.

The jackpot can keep growing from a Superdraw all the way until it reaches its €200 million cap. The top prize has not yet hit this amount – the maximum was €190 million prior to February – but it could be that the next Superdraw sets up a new record.

This November Superdraw is the only event to be held this late into the year and if it rolls over it could offer one of the biggest jackpots in history just before Christmas!

It promises to be an exciting time for players in all nine participating countries, with the potential for a huge win to round off 2020. Don’t forget to take part to give yourself a chance, and check the EuroMillions Results straight after the Superdraw to see if you have won.

If you won the eye-watering sum, here are some ways in which you can make the most of the jackpot and your new multimillionaire lifestyle.

One of the first and biggest purchases many lottery winners plan is a new home. Previous Euromillions winners have splashed the cash on incredible properties, from modern villas to sprawling Victorian mansions.

In 2012, Adrian and Gillian Bayford won £148 million and bought Horseheath Lodge in Cambridge for £6.5 million. The Grade II listed Georgian-style mansion came with 189 acres of land, a farm and five self-contained cottages.

The price of luxury properties can vary, with the most expensive in the UK selling for upwards of £150 million. In addition to the purchase price, it’s important to think about the cost of running a large home – and sometimes protected properties too. That could include staff wages, taxes, insurance costs and maintenance costs; together these can easily stack up into hundreds of thousands of pounds per year. But with £115 million in the bank, almost any home would be within reach.

For UK winners, jetting off to sunnier climates (when its safe) is one of the first priorities after hitting a jackpot win. It might not come as much of a surprise, but if you bag the £115 million, you can jet off on a luxury holiday to the most desirable sun-traps in the world.

For £54.8 million, you can buy a private island (Apo in the Philippines). A portion of your remaining millions would allow you to build a luxurious mansion on the island, leaving you to fill your days with relaxation, taking in the sun and diving in the crystal clear waters that surround your own private paradise.

However, there’s always the opportunity to go on an adventure. The White Desert camp in the heart of Antarctica consists of seven state-of-the-art sleeping pods, a communal lounge, library and dining room. From there, guests can embark on various adventures, which include trips to see Emperor penguins treks to the South Pole and alfresco picnics in the world’s most inhospitable continent.

White Camp comes at a hefty price, with the cost of a day trip running into the tens of thousands of pounds, the world’s most remote holiday location is also the most exclusive.

Tonight’s Euromillions draw is a staggering £70 million, get your tickets before 19:30 pm.

My Tweets
We use cookies to help identify your computer so we can tailor your user experience, track shopping basket contents and remember where you are in the order process. WTX News Our Cookie Policy
Daily News Briefing: Tougher Covid-19 restrictions begin for millions in England and Wales
Insta Talk e10: Luxury handbags – Benefits of turmeric – Emily In Paris & Sexy winter eye shadow!
To Top
Weekly