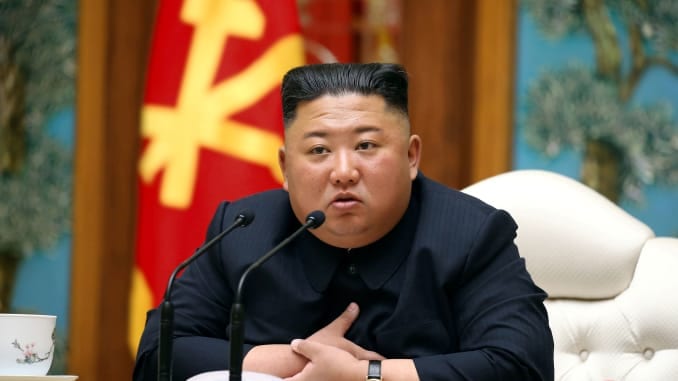 Kim reportedly told his South Korean counterpart Moon Jae-in that the “disgraceful affair” should not have happened.

South Korea has said the 47-year-old man was found floating in the North’s waters by troops and was shot dead and his body was set alight, according to Seoul.

The killing has caused outrage in the South. Its the first killing of a South Korean by North Korean forces in a decade.

The border between the two is tightly policed and the North is believed to have a “shoot-to-kill” policy in place to prevent Covid-19 from entering the country.

Kim sent a letter to President Moon in which he acknowledged that the incident should never have happened, according to South Korea’s Blue House.

Mr Kim called it a “disgraceful affair” and said he felt “very sorry” for “disappointing” Mr Moon and the South Korean people, the Blue House said.

The North also gave the south the results of its investigation — more than 10 shots were fired at the man, who was in North Korean waters and then failed to reveal his identity and tried to flee, South Korea’s director of international security said.

The North insists it had not burned the man’s body but rather the “floating material” that was carrying him.

“The troops could not locate the unidentified trespasser during a search after firing the shots, and burned the device under national emergency disease prevention measures,” Mr Suh told a briefing, referring to the letter.

President Moon Jae-in called the killing a “shocking” incident that could not be tolerated. He urged the North to take “responsible” measures over the attack.

The country’s National Security Council said the North could “not justify shooting and burning the corpse of our unarmed citizen who showed no sign of resistance”.

Officials said they had done a “thorough analysis of diverse intelligence”, but it was not clear how they had gathered the information.