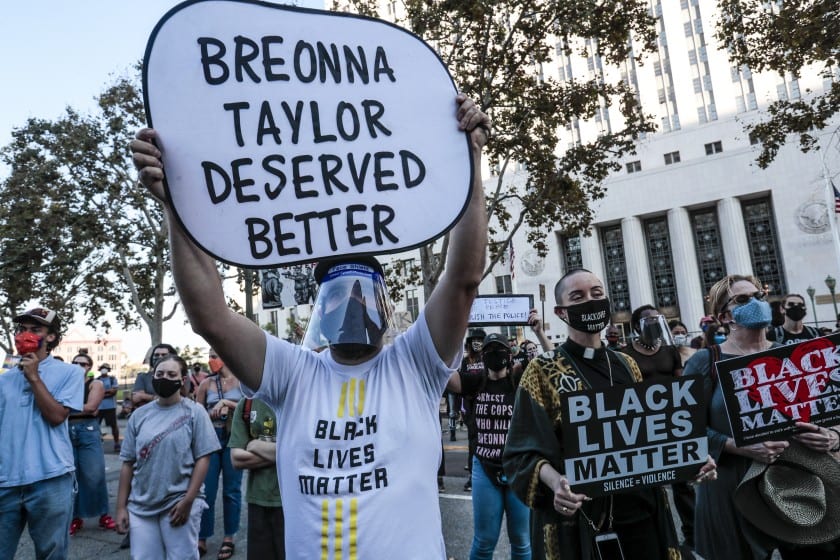 Breonna Taylor: Protests erupt after officer charged but not over her death

A police officer has been charged over the drugs raid that resulted in the fatal shooting of a black woman at her home in Kentucky, US.

Breonna Taylor, 26, a hospital worker, was shot multiple times as officers stormed her home on 13 March.

Officer Brett Hankison has been charged, but not with Ms Taylor’s death, but with “wanton endangerment” for firing into a neighbour’s apartment.

Two other officers who were involved have not been charged.

Kentucky law states someone is guilty of wanton endangerment if they commit an act that shows “an extreme indifference to the value of human life.”

This lowest-level felony offence can come with a five-year sentence for each count – Mr Hankinson was charged on three counts.

Breonna Taylor’s relatives and activist had been calling for the three officers involved in her death to be charged with murder or manslaughter. But it was rejected by a grand jury who reviewed the evidence.

Judge Annie O’Connell announced the charged that had been bought by a grand jury against Mr Hankison on Wednesday.

A news conference was then held in which Kentucky Attorney General, Mr Cameron said: “This is a gut-wrenching emotional case.”

“There is nothing I can offer them today to take away the grief and heartache as a result of losing a child, a niece, a sister and a friend,” he added in a message to Ms Taylor’s family.

Mr Cameron said a report had found six bullets hit Breonna Taylor, but only one was fatal.

The analysis found that Detective Myles Cosgrove had fired the shot that killed Ms Taylor.

Whilst saying it’s not clear if Mr Hankison’s shots had hit Ms Taylor, but they had hit a neighbouring apartment.

He said the other two officers – Jonathan Mattingly and Mr Cosgrove – had been “justified to protect themselves and the justification bars us from pursuing criminal charges”.

Mr Cameron, a Republican who is the state’s first black attorney general, added: “If we simply act on emotion or outrage, there is no justice.

He added that the FBI was still investigating potential violations of federal law in the case.

High profile lawyer for the Taylor family, Ben Crump, said the outcome was “outrageous and offensive.”

Officials this month agreed to pay the family $12m in a settlement.

Asked for his reaction to the decision, Mr Trump told a White House news conference: “I thought it was really brilliant.”

“I think he’s a star,” he said, adding that he approved of the Kentucky governor’s decision to send in the National Guard.

Governor Andy Beshear, a Democrat, urged Kentucky prosecutors to release the evidence that was presented to the grand jury.

“I think having more of the facts out there so people can see, people can truly process it, is where we need to be,” Mr Beshear told reporters.

Protesters in Louisville, and in cities across the nation took to the streets after Wednesday’s announcement. The Louisville Police Department confirmed 127 people were arrested as police responded to the Louisville protests Wednesday night.

According to CBS News, thousands gathered outside the Barclays Centre and protesters in DC had a few small clashes with police.

The San Diego police declared a protest in front of its HQ as an illegal assembly late Wednesday night “in response to acts of violence & vandalism” ad ordered all demonstrators to disperse. CBS8 said the protests remained largely peaceful.

Seattle police said at least 13 people had been arrested after protesters started throwing fireworks and glass bottles towards the precinct.

In Portland – where protests have been ongoing for months – police declared a riot after protesters lit a fire in front of the Multnomah County Justice Centre.

Two police officers were shot in downtown Louisville on Wednesday night, amid the protests. It is unclear if the shooting is connected to the Breonna Taylor protests, but it came just hours after the news that no officer was being charged over her death.

Both officers are said to be in a stable condition and a man has been arrested.